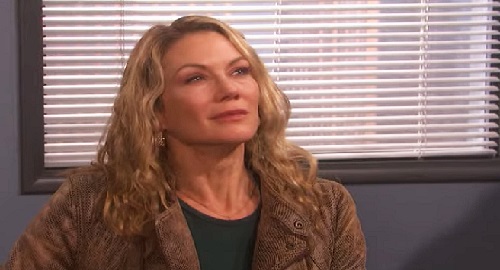 Days of Our Lives (DOOL) spoilers tease that Kristen DiMera (Stacy Haiduk) will return and become Gabi Hernandez DiMera’s (Camila Banus) secret weapon, so Chad DiMera (Billy Flynn) and EJ DiMera (Dan Feurriegel) will be furious over this betrayal. Let’s talk about Stacy Haiduk’s comeback as Kristen and what it’ll mean for the future of DiMera Enterprises.

For starters, we should point out that Haiduk’s been doing a great job as Susan Banks, but there’s just no substitute for Kristen! Susan couldn’t be more different from the scheming blonde bombshell – and Kristen will prove that when she makes a cutthroat business move.

DOOL fans know EJ has decided to make some changes to his life and wants to be real brothers with Chad. Now that EJ and Chad have called a truce, they’re ready to move forward as a team and oust Gabi from the company.

Days spoilers say things will look bleak for Gabi, even with Jake DiMera (Brandon Barash) working for DiMera Enterprises again. Gabi will see the DiMera sharks circling and worry Chad’s team with EJ will be too powerful to overcome.

What Gabi needs is an ally that’ll catch her enemies off guard. Gabi could use someone fierce in her corner, so it looks like Kristen will end up being that person for her.

As for why Kristen will support Gabi over her own siblings, she’ll have her reasons! Kristen is always working some angle and looking out for number one, so she’ll strike a deal with Gabi and plan to support her.

It sounds like Kristen will play a pivotal role in blocking Chad and EJ through some drama related to the shares. After Stacy Haiduk pops up as Kristen again during the week of May 16-20, the results of Kristen’s actions will spill over into the week of May 23-27.

That’s when EJ and Chad will find out about Kristen’s betrayal, so they’re going to hit the roof. Days spoilers say there’ll be some major DiMera family issues, so it’ll be fun to see Kristen again and watch her unleash more chaos.