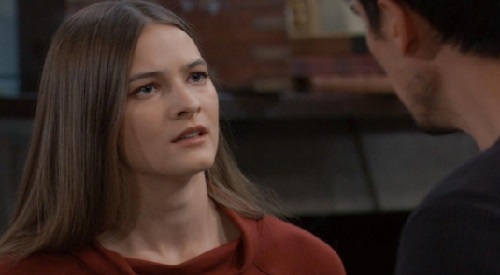 In the park, Nina Reeves (Cynthia Watros) acknowledged the lingering tension with Carly Corinthos (Laura Wright) and was willing to take a step back from Sonny Corinthos (Maurice Benard) until the hook danger was over.

However, Sonny acted like he’d made progress with Carly as co-parents and was adamant about Nina being in his life.

Meanwhile, Willow and Michael Corinthos (Chad Duell) were also in the park with Wiley Quartermaine-Corinthos (Viron Weaver) ahead of Willow’s appointment at GH. Once TJ Ashford (Tajh Bellow) appeared, Michael stepped away for a work call.

Willow admitted that although she hadn’t told Michael the truth about her leukemia yet, she was going to after her appointment. Nina and Sonny stumbled across Willow and TJ while they were hugging, so that led to some awkwardness.

Wiley rushed over to greet Nina and Sonny, but Willow pulled the kid back and suggested they’d schedule some Grandpa time later. Sonny tried to speak up for Nina, who insisted they should go.

Michael came along wondering what the problem was, but Nina dragged Sonny away. Soon after, Willow admitted Nina surprisingly seemed to know her place.

Since the nanny was running late, Willow urged Michael to keep Wiley a bit longer. TJ was headed to the hospital anyway and could take Willow to her appointment, so Michael agreed to catch up later.

Nearby, Nina reluctantly told Sonny that something might be going on between Willow and TJ. Sonny struggled to believe an affair was happening, but he warned Nina that Michael couldn’t know about this.

After overhearing, Michael approached Sonny and Nina to find out what they were talking about.

Once Terry Randolph (Cassandra James) made it home with Elizabeth Baldwin (Rebecca Herbst), Liz insisted she couldn’t be with Hamilton Finn (Michael Easton) and not tell him the truth about Reiko Finn (Mele Ihara).

Elizabeth thought maybe she should just break things off with Finn and avoid stirring up past pain, but Terry asked how that would make her any better than her parents.

Next, Cameron Webber (William Lipton) came clean to Liz about letting Josslyn Jacks (Eden McCoy) spend the night and assured her things were back on track in their relationship.

Once Cam revealed Josslyn Jacks (Eden McCoy) was believed to be one of the original hook targets, he shared the theory about all of them being connected to Trina Robinson (Tabyana Ali). Elizabeth was concerned and said to remind her never to go away again!

At the hospital, Finn approached Terry about the Monterey trip, but she felt he needed to get answers from Liz instead.

Finn also had a run-in with Heather Webber (Alley Mills), who was being wheeled out in a straitjacket ahead of her asylum transport. Heather kept trying to offer information on Jeff Webber (William Moses), but Finn wasn’t interested.

In lockup, Anna Devane (Finola Hughes) was relieved to see Valentin Cassadine (James Patrick Stuart), who revealed that Laura came through for him. Laura was also there to reassure Anna about her predicament and Charlotte Cassadine’s (Amelie McLain) safety.

In private, Valentin hinted about a plan to help Anna, but he realized time was of the essence since she was about to be transferred to Pentonville. Valentin then found Finn to let him know they’d have to bump up the timeline of what they had in store.

When a guard appeared outside Anna’s cell, she assumed he was there to take her to Pentonville, but he insisted that wasn’t where she was headed. As for Finn, he wound up on a nervous Liz’s doorstep.

In Robert Scorpio’s (Tristan Rogers) office, Holly stalled Victor Cassadine (Charles Shaughnessy) via text and pumped Robert for any other info on Anna.

Deputy Mayor Eileen Ashby (Heather Mazur) came in ranting about the strings Robert was trying to pull to get Anna’s bail. Eileen warned that she’d force Robert out as DA if he didn’t back off.

After Deputy Mayor Ashby suggested she was in charge until Laura decided to grace PC with her presence again, Laura appeared behind her.

That led to Laura putting Eileen in her place and greeting Holly, who blew up at Laura for suggesting Kevin Collins (Jon Lindstrom) could help with her memory issues.

Holly apologized for going off on Laura, who acted like she understood. However, Laura doubted Holly’s story privately to Robert and thought maybe she wasn’t telling him everything.

Deputy Mayor Ashby ranted at Holly for putting their connection to Victor in jeopardy before Robert spoke with Holly alone.

Although Holly acknowledged Laura’s suspicions, Robert made it clear that he trusted Holly. After Holly said that was all that mattered, she hugged Robert and looked uneasy over his shoulder.

As for Victor, he remained excited over the necklace Peter August (Wes Ramsey) left for Britt Westbourne (Kelly Thiebaud). Victor thought it could be exactly what he needed to move forward with the next phase of his plan.

In the north tower of Wyndemere, Nikolas Cassadine (Nicholas Chavez) found Esme near the sealed French doors and called her out for trying to pry one open. Nikolas assumed Esme wanted to scream for help, but he warned that the staff would look the other way.

After Nikolas once again accused Esme of being “The Hook,” she urged him to believe she wasn’t responsible. Nikolas remained skeptical since the hook attacks had stopped since Esme had been locked up.

Once Nikolas found Victor downstairs, it led to Nik’s outburst. Victor thought Nikolas wanted to get rid of him and spoke vaguely about his grand plan. An annoyed Nikolas just wanted Victor to come out with it already, so Victor decided that maybe it was time to reward Nik’s loyalty.

Before Victor could spill anything, he got a call about Charlotte being gone from her boarding school in Switzerland and asked who she left with. Once Laura appeared, she taunted Victor about welcoming her home.

Back upstairs, Esme managed to pry one of the doors to the outside open. Although Esme was up awfully high, she tied some blankets together for a makeshift rope that’d allow her to climb down.

At the hospital, Terry informed Willow that based on her latest test results, her leukemia was now in stage 4. TJ was there to support Willow, who looked deeply fearful over the news.