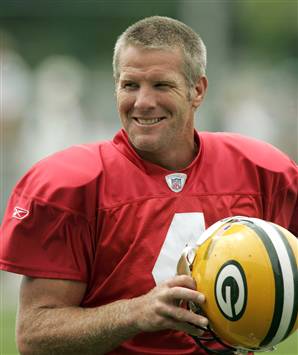 What better way for a low talent bimbo to get lots and lots of free publicity and try to boost her career.

TMZ reports – Sterger’s manager, Phil Reese, believes she “provided extensive evidence that irrefutably proves there was harassment” — and adds, “No matter what happens Jenn has all legal remedies, including going public … if the NFL doesn’t clear her name.”

Her manager Phil Reese says that if they are not satisfied that the NFL takes the proper measures to ‘clear his client’s name’ then they can go public with all the evidence.  Reese wants at least an NFL reprimand for Favre, QB for the Vikings.  He says that Jenn’s public image has suffered and he wants the NFL to clear this up.

I guess what Jenn and Reese are really saying is that a girl has a right to get breast implants (which Jenn did, then had them removed) and pose in porno mags without being viewed as a sex object.  We are not defending Favre’s behavior as we do not know to what extent Jenn and Favre were involved with each other at the time of the ‘sexual harassment.’  What we do know is the only person who can benefit from this is Jenn who is the person who made all this public and is pursuing it further and pushing it into the public eye.