Bristol & Sarah Palin Are At War 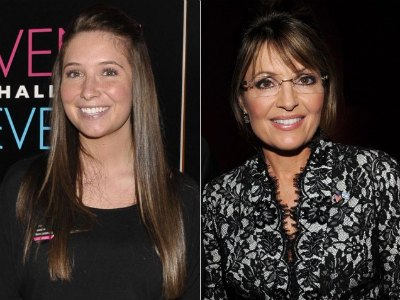 Bristol and Sarah Palin are now feuding, according to reports. Bristol was said to have outshined her mother and has gotten under Sarah’s skin!

Reportedly, due to Bristol’s success (or lack thereof) on Dancing With The Stars, Bristol has been offered her own multi-million dollar reality show (oh, the humanity), a clothing line endorsement deal and a book deal. Instead of being happy for her daughter, Sarah is mad!

A source said, “As she maneuvers toward a run for the presidency in 2012, Sarah wants her whole family behind her. She doesn’t want Bristol out front competing for attention.”

She is said to be terrified that her daughter will embarrass her in the public eye once again, like she did with her unplanned pregnancy. This has caused them to feud, leading Sarah to scream at Bristol, saying, “You owe me! You cost me the election in 2008 by getting pregnant!”

The pal said that Bristol miffed her mother by saying, “People like me more than they like you!”

If I may speak for the people that she’s referring to…I’d have to say, “No we don’t. We hate you both equally.”