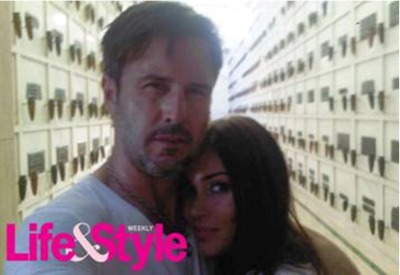 David Arquette’s mistress, Jasmine Waltz is finally speaking out about her affair with the married actor.

She said that they first met on September 30th, when he and some friends showed up at Premiere nightclub, where she was waiting tables. Within twenty minutes of first meeting her, he revealed that he and Courteney Cox had split up.

She said, “I was surprised to hear that. But his friends all seemed to know about it. He was beaten down. He mentioned that he hadn’t slept with anyone since separating from Courteney.”

Two nights later, they were hooking up! She said that he came back in the club and took her to a house party after her shift ended. They were both wasted drunk and left the party for another Hollywood pad at around 2:30 a.m.

She said, “It wasn’t bad sex, but it wasn’t emotional. It was quick and painless. Nothing exciting. When we were done, he just looked at me and said, ‘This is the first time I’ve felt like a man in a very long time.;”

It didn’t end there, either. She said that they hooked up again, but only after making sure that David was telling the truth about his split with Courteney. She said, “I definitely got the impression that Courteney had made the decision to separate. David did not seem like the one in control of the situation. Not at all.”