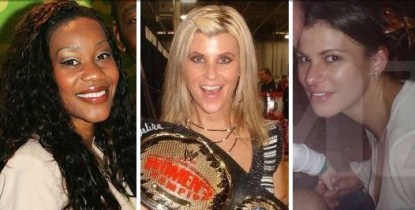 Add a new title to reams of ‘Reality’ shows purporting to show the world how people live –‘Wrestler Wives.’   First there was the “Real Housewives.” Then came “Basketball Wives.”  Now a show currently in production centers around a new group of famous spouses –  “Wrestler Wives.”

Multiple sources indicate that the people behind “Pit Boss” have teamed up with VH1 to produce a show which follows the wives of famous wrestlers and the pilot has already begun shooting in Houston.

The show could be serious if they allow it to be – wrestlers are the only Americans to divorce at a higher rate than movie stars – and the top performers bring in serious money and have a history of tons of drug and steroid abuse (recall the Chris Benoit double murder/suicide).