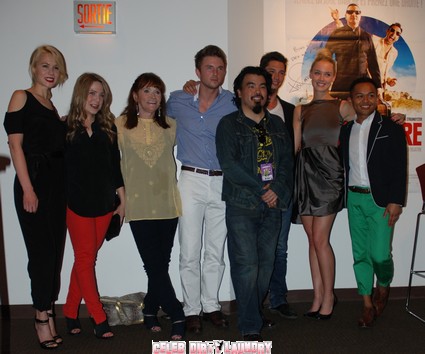 Last night we attended the premiere showing of the very funny comedy film ‘Servitude’ featured under the aegis of Montreal’s Just For Laughs Comedy Festival.

Directed by Warren Sonoda, ‘Servitude’ is all about making the audience laugh. One liners, sight gags, slapstick, satire – its all in this fast paced fun and very funny new flic.  The vehicle that carries all this good humor is the story is about a group of waiters working at a branch of popular ‘western style’ steakhouse chain. Suffering long-term frustration due to obnoxious custys and new nazi-like management and ownership, the staff decide to stage a mutiny and take over the restaurant.

The film works – a comedy needs to be funny and this audience laughed often and heartily, myself along with them.

Made with the help of subsidization from Telefilm Canada, a federal agency devoted to the development & promotion of the Canadian audiovisual industry, Servitude is the first product made in the agency’s Comedy Lab.

The event was held at the Cinema Du Parc – absolutely Montreal’s best movie theater – where we were treated to a Q&A session with the director, writer, and most of the cast following the screening. Along with popular new releases Cinema Du parc regularly shows domestic and foreign films that are not always easy to find elsewhere.  In fact we saw “Bobby Fischer Against the World” here a few weeks ago.

If you want to enjoy lots of really good laughs in a fast-paced clever Canadian film than go and see ‘Servitude.’