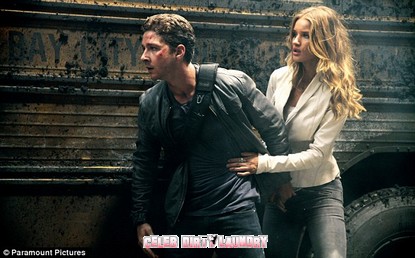 The film is being viciously slammed by critics and Rosie Huntington-Whiteley’s performance is taking the brunt of the beating.  Comments about Rosie’s acting have been uniformly negative.

Empire magazine says: ‘Bay introduces her with a self-parodying shot of her barely-clad bottom and it’s all downhill from there. You’ll believe a robot can fly, but you won’t believe a Huntington-Whiteley can talk.’  ‘Huntington-Whiteley is so terrible, in fact, she makes her co-stars bad too,’ adds Total Film.

Daily Mail critic Baz Bamigboye said: ‘Huntington-Whiteley shows up in a figure-hugging, tighty-whitey dress but she’s all window dressing and doesn’t exactly excel at delivering her banal lines. Poor Rosie Huntington-Whiteley.  She may be beautiful but she can’t act for toffee.’

Other film writers agreed, with Chicago Sun-Times calling LaBeouf ‘scarcely heroic’, and adding that ‘his girlfriend has no particular function except to be in constant peril and (in two hilarious shots) stare thoughtfully into space as if realizing something.’ ‘Transformers: Dark of the Moon’ cost over $195 million to make but so far looks headed to bomb.

One critic even said he would prefer to be tortured than have to watch the film again.  ‘Given the choice between sitting through 154 minutes of ‘Transformers: Dark of the Moon’ and being waterboarded, I plead: Waterboard me!’ wrote James Verniere of the Boston Herald.

He added: ‘Is this Transformers better than the first two? That’s like saying cyanide is better than arsenic because it’ll kill you faster.’

Other critics are nearly as harsh, with the Chicago Tribune calling the film, released in the U.S. today,as ‘a work of ineffable soullessness and persistent moral idiocy.’

A.O. Scott in the New York Times adds: ‘I can’t decide if this movie is so spectacularly, breathtakingly dumb as to induce stupidity in anyone who watches, or so brutally brilliant that it disarms all reason. What’s the difference?’

The film, which premiered in New York earlier this week, sees Shia LaBeouf in his role as the world-saving hero Sam Witwicky, along with his new girlfriend, Carly, played by Rosie. ‘Dark of the Moon’ follows LaBeouf’s Sam as he fights alongside the Autobots against a new evil Decepticon plot to take over the earth.   Why would any adult – apart from a paid critic or blogger – waste their time on this trash?