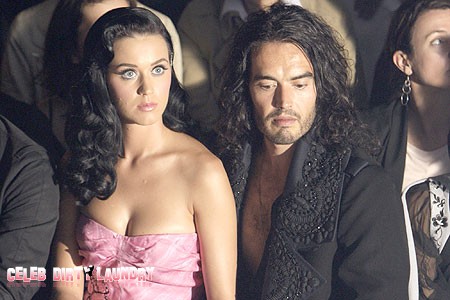 Katy Perry and Russell Brand spent Christmas 7,000 miles apart following a huge fight – and no matter what the couple have to say about it, that type of behavior does not fit in a happy marriage. Stories circulated recently that the couple might be splitting up and this separate his and hers Christmas substantiates the rumors.

After originally planning to fly her family via private jet to husband Brand’s London hometown for the holidays, Perry, changed course, opting to fly to Hawaii with friends was NOT WEARING HER WEDDING RING.

Us Weekly reports a source saying:  “They had a massive fight. She was like, ‘F–k you. I’m going to do my own thing.’ Russell replied, ‘Fine, f–k you too.'”  Though the pair denied divorce rumors in November, sources say trouble is brewing. “They haven’t split up just yet, but things are not good,” says the first source. “  The fighting is getting worse, Katy doesn’t think Russell respects her parents’ Christian beliefs or her friends.”

Bottom line was that Perry was in Hawaii for a vacation in a private villa with friends, while Brand spent Christmas in Cornwall, South West England.

Brand had lunch in a pub in Coverack village and then attended his comedian friend David Baddiel’s charity swim where he was mobbed by fans and happily posed for pictures.

Perry was spotted surfing and frolicking in the sea and on the beach with friends.

The couple’s decision to spend the festive season apart has reignited rumours their 14 month marriage is in serious trouble.

Brand has previously insisted he and Perry are very happily married and intend to stay together “until death do us apart.”

Earlier this month, the ‘Arthur’ star – who married Perry in India in October 2010 – said: “There are always rumours, aren’t there? In the end you have to just not engage with Internet technology. I’ve treated the whole Internet now like it’s a wicked little liar. I am really happily married.”

“Being famous is like a little bit of you is taken away and goes off and lives on its own and does what it wants. I wish it would do more interesting things. I don’t know what he’s doing, the other me, but I’m married to Katy. Perpetually, until death do us part was the pledge – and I’m still alive.”

All that is just talk – actions speak louder than words – and the couple’s decision to spend Christmas apart tells us to expect more news soon.