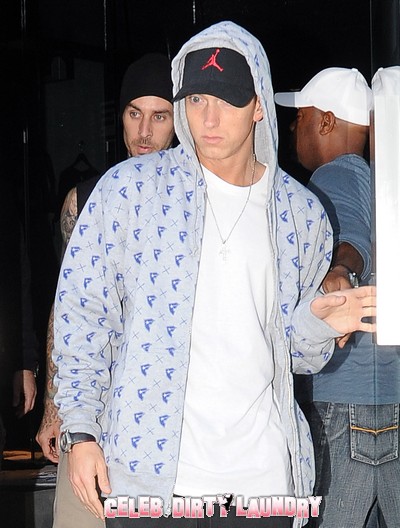 Eminem says that abuse and addiction to prescription drugs “wiped out five years” of his life.  Eminem is still producing hits as ‘Love the Way You Lie’ proves but he claims that he is no longer abusing drugs. The rapper’s battle with drug addiction came to a head after his 2004 album ‘Encore’ and forced him to take five years off before starting his comeback.

Eminem says drug problems were so intense that he has lost entire years of his memory.

He told Rolling Stone magazine: “I try to stay recording, because if I don’t, I get rusty. I’m very paranoid about writer’s block – I had it for four years, and it drove me f***ing crazy. No matter how hard I tried, I just couldn’t think of s**t.”

“The pills had a lot to do with it. Just wiping out brain cells. I don’t know if it sounds like I’m making excuses, but the absolute truth is a lot of my memory is gone. I don’t know if you’ve ever taken Ambien, but it’s kind of a memory-eraser. That s**t wiped out five years of my life.  People will tell me stories, and it’s like, ‘I did that?’ I saw myself doing this thing on [TV network] BET recently, and I was like, ‘When was that?'”

The 38-year-old rapper still wrote music during the heaviest period of his addiction, but admits that looking back over his words from that period is a difficult experience.

He added: “It f***ing creeps me out. Letters all down the page – it was like my hand weighed 400 pounds. I have all that s**t in a box in my closet. As a reminder that I don’t ever want to go back.”

Eminem’s drug problems began in 2002 when he made the semi-autobiographical movie ‘8 Mile’ and got worse on subsequent tours.

Eminem looks like a success story in terms of beating drugs since he has been clean and sober since 2007.