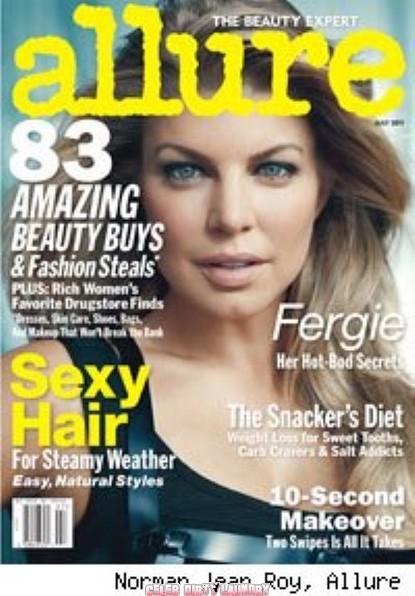 The Black Eyed Peas female singer Fergie (otherwise known as Stacey Ferguson), will be gracing the cover of Allure magazine – and from what I’ve seen, she looks gorgeous as ever!  Along with posing for the mag, the singer took to clearing up some rumors and setting some records straight.

When asked about her ageing secrets, she admitted that she is and will always be a kid at heart, and that she’s just “trying to age gracefully”.  Aren’t we all sister!

Although being with her successful band takes up a lot of time and energy, she said she took some well-needed time off to get married (her hunky hubby is actor Josh Duhamel) and spend time together as newlyweds.  And fans can rest assured, despite the recent pregnancy rumors, there is no baby Black Eyed Pea in the oven yet.  That’s not to rule it out though she says.  All in due time girl!

She told the magazine:

“I think people think I’m pregnant sometimes because my weight fluctuates.  My problem is my discipline.  I see a Jack in the Box or a Del Taco, and I will impulsively want it. I’m a work in progress in that area.”

You’re not the only one, although I have absolutely no idea what a Jack in the Box is, but I usually give anything a try.  And if that’s what makes her ‘weight fluctuate’, I’ll eat ten of them!