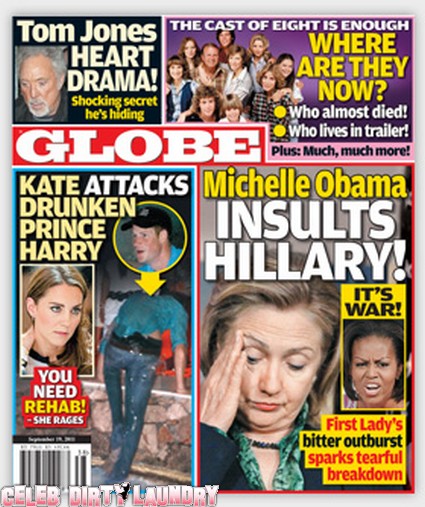 In the September 19th issue of Globe their cover story features Hilary Clinton and Michelle Obama.  ‘Michelle OBama Insults Hilary!’   The magazine claims there is a war brewing with with the first lady Michele Obama and Secretary of State Hilary.   They also claims to have also the info on the first lady Michelle’s bitter outburst that sparks a tearful breakdown by Hilary.

Globe claims:  Hillary Clinton suffered an alarming secret breakdown after a bitter clash with First Lady Michelle Obama, and now Bill’s wife is threatening to quit her Secretary of State post. You can read all about Michelle’s bitter insults that have touched off a firestorm behind White House walls. It’s all in this week’s GLOBE.

Again most likely pure speculation on the part of the magazine.   Also in this weeks magazine they claims party hardy Prince Harry is out of control.   Prince William‘s wife Kate Middleton is apparently trying to get him to go to rehab.   No mystery where this rumor came from Prince Harry known for his partying ways is headed to Las Vegas.  He is going to be attending a helicopter course and going to Sin City for a day or two.  With the casinos, nightclubs and strippers galore they are hoping Prince Harry will be up to some shenanigans.

If you must read more pick up the current copy of Globe.