POLL: Who Will Win Dancing With The Stars Season 13! 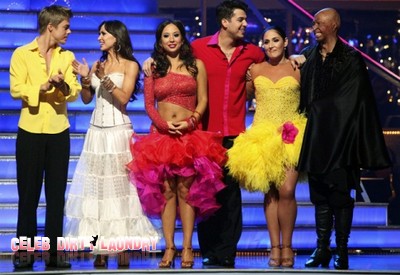 Last night was the first part of the finale of Dancing With The Stars season 13.  The competition was fierce as the contestants battled it out to win the Mirror Ball Trophy.  Last night the contestants had to complete two routines:  one a dance they had not performed all season; and the other the ever popular freestyle.  If you missed last week’s episode you can read our official recap here!

At the top of the leaderboard with a 57 is Rob Kardashian and his partner professional dancer Cheryl Burke who had  a perfect freestyle dance.  Maybe it was sister Kim Kardashian who was in the audience who brought Rob luck :-)  Tied at the bottom of the leaderboard are Ricki Lake and J.R. Martinez.

The Mirror Ball trophy and the scores are so close it is still anyone’s competition.  On tonight’s show the couples will dance a favorite dance of theirs.  Rob/Cheryl will dance the Foxtrot to “Fly Me To The Moon” by Frank Sinatra, JR.Karina will dance 1st Jive to “Jump, Jive, and Wail” by Brian Setzer Orchestra and Ricki/Derek will dance the Psycho Tango.   After the scores are announce the final two will dance an instant Samba.

Below are the scores from last night and links to the videos of the couples performances, let us know who you think will be winning Dancing With The Stars!