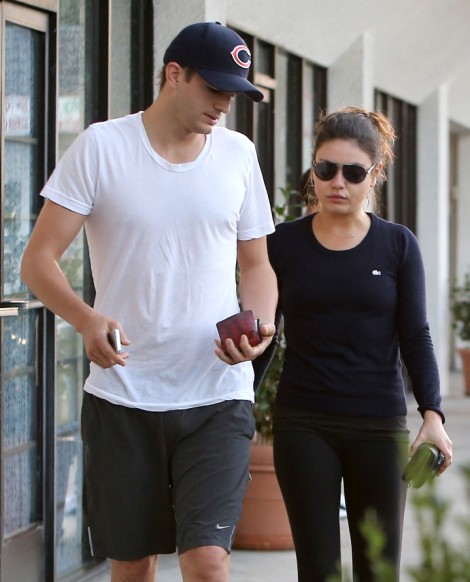 I can’t help but be reminded of a stupid but cute joke at the moment. How do you make love to a porcupine? Very, very carefully, right? Well, that’s what I imagine ran through Ashton Kutcher’s head when he had to tell Demi Moore his much younger, much hotter, and much more in demand girlfriend, Mila Kunis, is pregnant and they are getting married. How did he do it? Was it in person? On the phone? Quick text? However he did it, I’m sure it was done very, very carefully.

If you believe Star magazine, that is. Star has the young, popular couple on the cover with the headlines that they’re in the family way and planning a quickie wedding. There’s a few roadblocks though to the story’s believability. First, Mila came out and denied the baby. Fine. Par for the course. Then, Ashton’s still technically married to Demi which only proves my point that he’s a piece of shit of Kim Kardashian levels. And, finally, do you actually think Ashton had the balls to tell Demi Moore about a pregnant Mila Kunis? I wouldn’t relay the joyous (probably fake) news from an ocean away! Consequently, Ashton and Mila are an ocean away in Australia on vacation so maybe he did pop the surprise over a fast text….

Can we be cool to Demi? Can we completely lie and stick our heads in the sand and believe she’s calm about the whole thing? Can we believe she’s moved on and wished them well? Can we believe she actually feels sorry for Mila because she might be attached to Ashton for the next 18 years? Can we believe that Demi might grow the f-ck up and acknowledge that she’s the lucky one out of this busted up trinity?

Or is it too hard to believe a 40-something Hollywood actress would have that kind of self-esteem and control? Demi really needs to start hanging out with Susan Sarandon. She’s knows what it’s like to be with a younger man and to walk away. She’d slap Demi around and set her straight, and something tells me it wouldn’t be done very, very carefully. But maybe that’s OK. The last thing Demi needs right now is kid gloves.