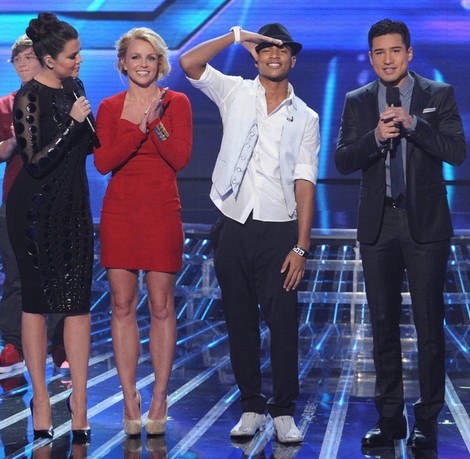 The X-Factor USA served up some shocking results last night. During an emotional and tear-filled Thanksgiving episode, several of the contestants delivered below-par performances. We had Paige Thomas who tried her utmost best to finish her song without suffering a nervous breakdown, we had CeCe Frey who came off contrived and fake, and we had Arin Ray who blundered his way through an emotionless Enrique Iglesias song. These three were an elimination given, but the gods of X-Factor smiled down upon them and gave Paige the Get Out Of Jail Free card.

The ex-InTENsity member, Arin Ray, was the first contestant to immediately be eliminated. There was no sing-off, no chance at survival, and no second guessing. His elimination didn’t come as a shock, as most of us knew that his cookie was about to crumble. He was second from last during the previous week’s popularity poll, so Arin had to do something spectacular to keep his footing in the competition. Instead, Arin bored the audience to death by doing an overdone and clichéd song. The first week of official popularity polling, Arin was stuck in 11th place, and missed elimination by the skin of his teeth. Alas, the X-Factor comeback boy did not survive the audience’s guillotine this week.

The contestants in danger of elimination were CeCe Frey (no surprise there!) and Beatrice Miller (what?). CeCe’s bipolar slipping on the see-sawing leader board tossed her back into the spin cycle of near-elimination. She was in the bottom two during the first week of competition – Jason Brock went home – and she was in the top five during last week’s popularity ranking. This week, however, she lost her 5th place lead and fell into the bottom three. Unfortunately, Beatrice Miller joined her. The votes fell in CeCe’s favour 3 -1 (Demi Lovato voted Beatrice, Britney Spears voted CeCe, L.A. Reid voted Beatrice, and Simon Cowell voted Beatrice).  And once again, the queen of the sympathy vote was saved by the skin of her teeth.

Beatrice’s elimination, on the other hand, came as a bit of a shock. She hasn’t been one of the worst contestants, nor has she ever been in last place on the popularity ranking. Her performance last night was finally a worthwhile experience, but we do have a sneaky suspicion that Beatrice peaked too late in the competition. The front-runner contestants have been excellent from the get-go, but Beatrice has been stuttering like a broken down Volkswagen. Was it her time to go? No. Could she have picked up the pace? Perhaps.

Inconsistency is the death-blow to any contestant on a reality television talent show, and unfortunately, Beatrice’s clumpy proof in the pudding was ironed out much too late to have any impact on the competition.

The public popularity ranking did not experience a massive change in positions. CeCe Frey went from having the biggest gain last week, to the biggest loss this week, while Paige Thomas had the biggest gain this week. Tate Stevens was also kicked out of first place and Carly Rose Sonenclar took the lead. There’s no popularity poll for the eliminated contestants, so we placed them in position of elimination