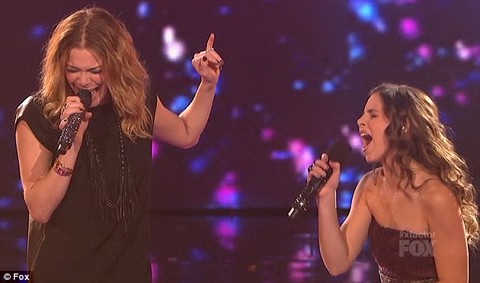 Carly Rose Sonenclar should have been the winner of the X-Factor USA, but unfortunately, it just wasn’t in her destiny. Did her duet performance with the unstable and possibly drunk Leann Rimes the night before cost the kid her victory? Well here is a theory that explains Carly’s stunning loss without blaming Leann.

We have discussed, at length, why Carly will be the winner of the show, but ultimately, our theories fell on deaf ears when Tate Stevens was awarded the sparkly X-Factor crown. Fearing contradiction and hypocrisy, we’ll move away from our weekly voting demographic rant and focus solely on the music industry.

There’s a massive niche for Carly’s type of music. She’s the child prodigy with the voice made in the lap of the universe, she’s the ultimate vocalist, she’s the power player in a pool of dimwits, but – and there’s always a “but” – Carly did not connect on the same emotional level as Tate did. She was flawless and perfect, but as we know in reality television, perfection doesn’t give you the prize. There’s beauty and relevance when it comes to imperfection.

In many instances, especially during American Idol, the perfect vocalist and performer did not make it past the final 6 contestants. Perfection does not translate well on a television screen. It doesn’t give the viewer something to root for, because perfection can neither be defined nor improved on. This is what you get – a perfect star with a perfect voice with a perfect personality. However, seeing that the viewers who vote on a regular basis have to live with the choice they made in the end, they seem to always vote for the contestant with the imperfect vocal inflections and personality. The contestant needs to relate to your average Joe, because Joe decides who the winner is in the end.

Yes, there’s a black hole in the music industry waiting to be filled by a reality television contestant, but this black hole can take on any shape and/or form. Country music was a distant memory during the initial phases of American Idol, but after Carrie Underwood took the prize, that genre opened the doors for millions of country singers to try their luck on a reality television talent competition. Her win did not only carve out the path for story-telling lyrics, but it also re-shaped that black void in the music industry to be filled by someone other than a “pop star” with cool songs and a suave vibe. Scotty McReery and Lauren Alaina became the second and third reality TV contestants to fit into the void, and now, Tate Stevens became the 4th contestant in US reality TV history to shape himself into that position.

Ultimately, Carly’s niche – although unique – was already filtered and clichéd. Her perfection might have been her decisive downfall, as the genre of pop balladry and controlled vocals does not need another singer with almost the same tone as everyone else. Instead of standing apart from the core of pop stars, Carly eventually slipped back into the masses and became a robotic version of the music industry’s finest.