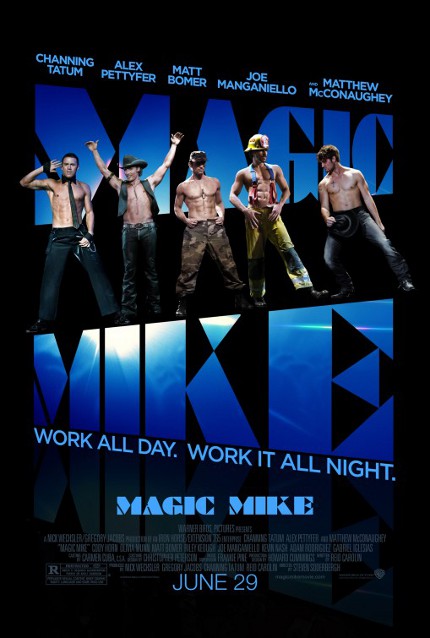 Channing Tatum, Matt Bomer, Alex Pettyfer, and Matthew McConaughey. What do all these names have in common? Well, first of all, even though they sound like stripper names, these are the actors starring in the roman á clef, Magic Mike. This film, being released on June 29th, is the semi-autobiographical account of Channing Tatum’s humble beginnings as a stripper.

We have all seen the Channing Tatum modeling images on Google and all women (and many men) had tiny myocardial infarctions. Film audiences the world over have waited for this male testosterone infused, pedantic little tale and finally, the poster has been revealed. The lead actors of the film stand upon a tacky blue “MIKE” on the poster, referring to the “Mike” in Magic Mike. They all pose in super-male stripper poses, reminiscent of a Chippendales Vegas advertisement. The tagline of the film is splattered across the bottom (no pun intended) of the title, “Work All Day, Work It All Night”.

Film critics are slowly dying inside as they await the release of this film. Many critics are harshly reminded of Demi Moore’s Striptease and are terrified of another stripper film. The film’s trailer received an “A +” from Geek Scholars Movie News and they noted that the trailer “showed Tatum’s ability to deliver a fun performance while giving his character an ample amount of depth”.

Magic Mike’s budget was $5 million and is distributed by Warner Bros. Pictures. It is directed by the consummate Steven Soderbergh.

Is Magic Mike really that magical? Will the film be a complete critical mess? Will the box office shun it aside for larger summer releases?

Whatever you’re doing in 2012, don’t miss the release of this film. It will not only have everyone’s tongues wagging, but will also be a stark reminder of what can go really wrong in Hollywood.