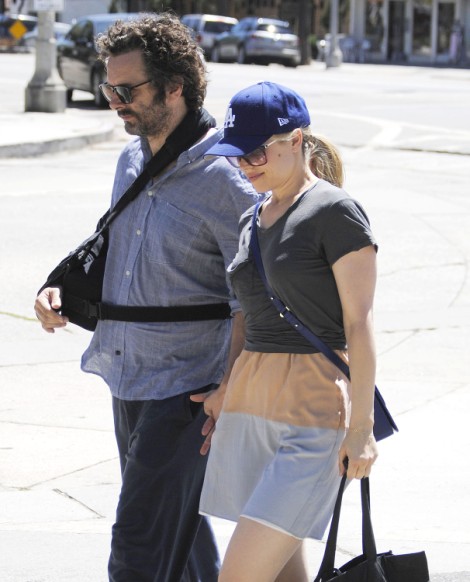 Rachel McAdams stepped out with a crippled and bedraggled Michael Sheen this weekend sporting a suspicious-looking baby bump. McAdams even pulled the whole “large bag over the belly” trick but I was not fooled! And since it’s Labor Day, let’s take a moment to gawk at the photos below and photo-assume the hell out of Rachel’s belly!

What do you think? I’m not… sure. At least we know she isn’t filming this time. But it could just be the dress or a food baby. The pics aren’t super convincing. I don’t understand why anyone would wear a dress that makes your stomach look poochier than it already is that day but some people are less shallow than I am and probably have more important things on their mind. But Rachel is serious with Michael. They’ve been together for the last couple years and she’s 34. The timing is right. And, perhaps the most convincing example of their love is that they sat in the royal box during Wimbledon this summer. I would NEVER watch great tennis in person with someone I only had lukewarm feelings for because they could ruin the entire match and the great seats so this couple must be the real deal.

Now, I don’t want to do it. I don’t. I really don’t but I can tell you want me to so I will. I’ll bring him up. Rachel McAdams’ ex, Ryan Gosling is also getting super serious with his girlfriend, Eva Mendes, and she just recently pulled the whole “bag over the belly” move. Coincidence? Probably but interesting and gossip worthy nevertheless. I’ve finally come to terms that Rachel and Ryan won’t get back together. But if they do both get married or have a baby around the same year it will be so weird! Why do celebrities do that! Jessica Simpson and Nick Lachey (babies); Nicole Kidman and Tom Cruise (remarried); Jennifer Aniston and Brad Pitt (remarried – maybe). Why have major life events at the same time? It just looks conspicuous!

Despite appearances and the fact I’m pretty sure he doesn’t shower in between movies, Michael Sheen seems like a solid dude for Rachel. And he already has a daughter (with Kate Beckinsale) so Rachel already knows he’s cool with babies. This is one of those photo-assuming stories that might be more wishful thinking on my end. I love Rachel McAdams and a pregnant Rachel would be fun to see. However, just because we’re guessing at her state, doesn’t mean we’re wrong. Like I said, the timing is right for a baby. She’s at the right age; has the right guy; and only has one movie in pre-production. You heard it here first!

What do you make of the photos? Could we be overreaching or is there something about that couple that makes you think they’re ready for baby?