Justin Bieber Vows To Be With Selena Gomez For Eternity 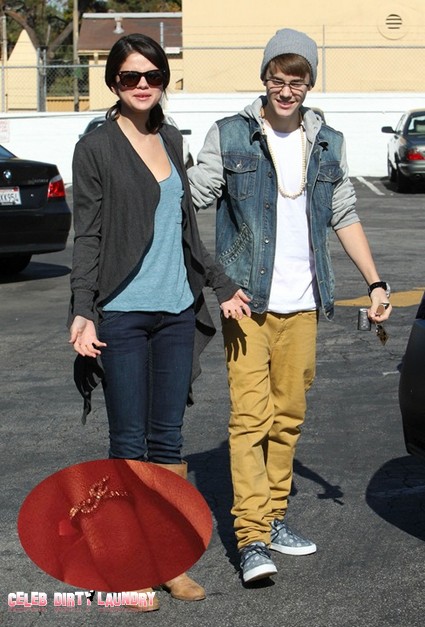 Justin Bieber knows just what a girl wants and that is why he gave Selena Gomez an eternity ring. Some sources say the ring is shaped like a ‘J’ (for Justin) and others claim it in in the shape of an ‘F’ (for Forever) – but in either case it means love.

A source revealed to Ok Mag:  “It was kind of a pre-engagement ring, really.  They’re too young to get married, but they are just head over heels in love with each other and they want to spend the rest of their lives together.”

“It symbolizes their intention to be together for a long time.  They are 100 percent monogamous.  Justin has girls throwing themselves at him all the time, but they are essentially invisible to him,  Her never misses an opportunity to tell Selena how beautiful she is.”

Hollywood Life had the following to say:  “Selena’s new diamond-studded ‘J’ ring wasn’t just a pre-Valentine’s day gift — it was a pre-ENGAGEMENT ring! Do you think they’ll last forever?”

Selena Gomez, 19, shared a pic on Instagram on Feb. 12 of a ring in the shape of a ‘J’ with the message “I’m finally home” during a romantic date with boyfriend Justin Bieber, 17, in New York City. And now a new report claims the super cute gesture was Justin’s way of promising Selena he’ll be with her forever.

This comes almost a year after the pair stepped out holding hands at the Vanity Fair Oscar party on Feb. 27, 2011. From tropical romantic getaways around the world to Mariah Yeater accusing Justin of being her baby’s daddy, the two young lovebirds have definitely had a whirlwind of a year, but are stronger than ever.

OK Mag had a slightly different spin on the ring and its significance:  LET’S just clear up a rumour that’s currently spinning a little out of control.
Selena Gomez and Justin Bieber are NOT engaged and her diamond ring is clearly NOT an engagement ring.

The singer posted a snap of her sparkly ‘F’ eternity ring (which we’re assuming stands for ‘forever’) on Instagram, along with the message: “I’m finally home :) But despite Selena’s ring causing a flurry of proposal rumours, the pair aren’t planning on tying the knot any time soon.

Selena has been sporting the ring – on her right hand, we might add – since December, which means it was probably a Christmas present from Justin.

The significance of Selena’s snap is more likely to be about the fact that it shows Justin holding her hand, meaning, ‘I’m home and back in Justin’s arms’ – as opposed to, ‘we’re engaged’.

We won’t get mired in the details but we know one thing for sure. Justin and Selena are true couple and very much in love.