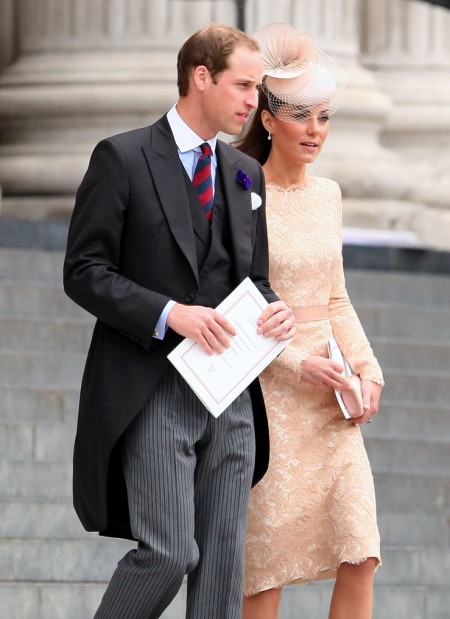 New reports are surfacing that Kate Middleton is snooping into Prince William’s wild playboy past so another Prince Harry-sized sex bomb doesn’t come back to slap her in the face. Now magazine reveals Kate doesn’t necessarily think Wills has been stepping out on her, but she is worried slags will come forward insisting he has to make some money on the side.

“But Wills does like to have a lads’ night out,” a source told the magazine. “And she’s also thinking back to when they split for three months in 2007 and fears women he partied with then could come out of the woodwork and try to make money from him by selling their stories.”

Why hasn’t this happened yet? William has been caught drinking and taking pics with girls so why haven’t they played kiss and tell? Is it because the newspapers won’t play ball since he’s the heir and considered off limits? Or is it because, unlike Harry, William has kept his one-night stands to Britain’s upper crusts ladies. He dated a handful of hotties before Kate (and after on one of their many breaks) but they were all blue bloods and wouldn’t dare of snitching on their prince, let alone selling a story. God forbid the palace get pissed and not invite the blabber to the next garden party/regatta/champagne toast thingamajig. Or it could be that the palace keeps indiscretions on the down low by outbidding the tabloids for information? What? Not William you say?

But you’d have to think Kate and Wills have already been properly vetted, right? I’d liken it to the Scientology wife-auditioning we’ve been hearing so much about. There’s no way Kate or William would embark on royal life if they had some sordid stories out there. God that’s embarrassing. Can you imagine Kate getting a sit down about her past love/sex life. Do you think they have the royal gynecologist ask the invasive questions and then he goes back and tells the handlers? But this isn’t about Kate. People always marvel at the fact that no one from her past has had anything bad to say about her but I think a lot of that has to do with the fact that she met Prince William while she was still a teenager and hadn’t done much. The years she was supposed to be experimenting with kissing girls and engaging in co-ed threesomes were spent waiting around for William to call. I have no doubt Kate’s clean. William, on the other hand, well… he’s a prince. And he’s Prince Charles and Princess Diana’s son. Harry might throw his sh-t out for all to see but if you think William was any less amenable to the perks of princedom, you’d be sadly mistaken.

Funny though that the tabs are saying Kate Middleton is worried now. Bitch please, she had ten years to get herself ready for this. You think she’s going to let William surprise her with anything now that she’s finally got the crown? Kate’s got this locked down. I’m certain she dug for skeletons but that conversation happened five years ago. Kate watched for eight years as girls threw themselves at her man, do you honestly think there’s anything she doesn’t know?