Kate Middleton Disses Princess Diana: Plans To “Be Different as a Mom” 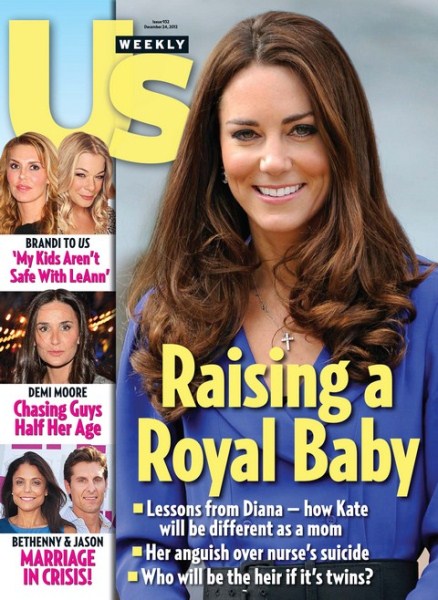 On the latest cover of Us Weekly, Kate Middleton pops up like a bad pop single with the taglines: “Raising A Royal Baby – Lessons From Diana; How Kate Will Be Different As A Mom – Her Anguish Over Nurse’s Suicide – Who Will Be The Heir If It’s Twins?” Interesting topics Us is covering this week, as all of them are as vague and as encompassing as the rest.

In the top left corner we have the sneaky, villainous faces of Brandi Glanville and LeAnn Rimes. Below their robotic Botox mugs is a tagline that reads, “Brandi to Us – My kids aren’t safe with LeAnn!” Obviously no kid is safe with LeAnn, as she’s one scream away from a total nervous breakdown. Not only did she steal Brandi’s ex, Eddie Cibrian, but she’s now also stealing the sanity of Brandi’s kids. There’s nothing like the smell of a crazy LeAnn Rimes in the morning.

Below the bitches from the West is Demi Moore’s terrified face – seriously, she looks like she just found Ashton Kutcher naked in her bed… with Mila Kunis! – with the tagline, “Demi Moore – Chasing guys half her age.” That does make sense, doesn’t it? What would the world be without the cougar-like Demi prowling the streets of West Hollywood? Justin Bieber better watch out, because that man-child might soon be gobbled up by this dragon!

And finally, in the bottom left corner we have Bethenny Frankel and Jason Hoppy declaring that their marriage is going into crisis mode. Firstly, why is his last name Hoppy? And secondly, what’s going on with her neck and her mouth in the photo? Is she hiding Slumdog Millionaire in her throat?

If you’re interested in reading about Kate Middleton’s parenting methods, Brandi and LeAnn’s relentless feud, Demi’s man-hunt, and Bettheny’s marriage woes, you should head down to your nearest store and lay your hands on the latest copy of Us Weekly.

Remember boys and girls, it’s not Us until we cuss!