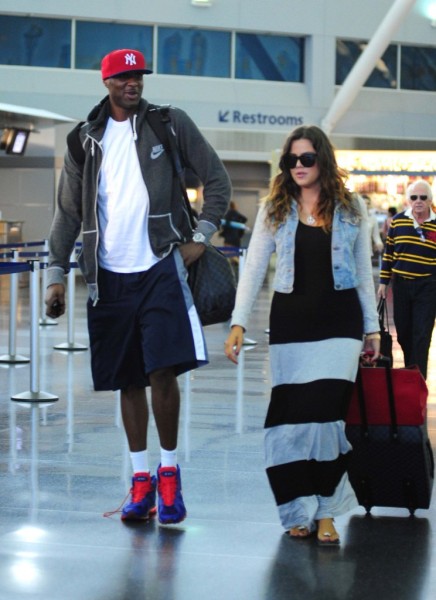 Nothing says We’re not getting divorced! quite like a pregnancy story. If you believe the tabloid covers, Khloe Kardsahian and Lamar Odom have been splitting up the past month. As the weeks progress, the headlines get more and more heightened. First Lamar was caught cheating, then Khloe was going to raise their unborn children on her own (not sure how that’s possible though), and just recently, they were in the middle of a $67 million divorce. But all the heat’s on Bruce Jenner and Kris Jenner’s collapsing marriage now so Khloe and Lamar are blissfully happy again and getting on the baby train so they can give the gift of their pregnancy to one and all. Beat that Santa!

According to a new report, Khloe is putting all those infertility issues aside and willing a baby. If it were that easy wouldn’t she have one by now? If this doesn’t open your eyes I don’t know what will. As of right now three Kardashian women are in the news. Kourtney Kardashian is still married but hashing out a prenup with baby daddy, Scott Disick. Kris is sneaking around with divorce lawyers and Khloe is trying to get pregnant. They’ve got their bases covered, don’t they? Are you having baby troubles? Money troubles? Husband troubles? EVERYONE can relate to a Kardashian at the moment which makes their crazy brand all-encompassing! That’s why I refuse to buy the Christmas baby. It’s just too obvious. The only reason Khloe’s not having babies right now is because Kourtney’s already got the market covered. The second her eggs dry up then Kim can fight Khloe for the right but lord knows Mama Kris isn’t going to blow her load on two daughters pregnant at the same time. That’s just bad business.

Are Khloe Kardashian and Lamar Odom expecting an announcement this holiday season or are they just tired of pretending they’re getting a divorce. Do you believe any of the Kardashian plot lines anymore? Why is a pregnant Khloe Kardashian so hard to believe?