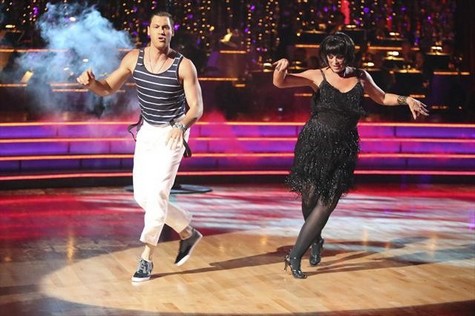 Kirstie Alley danced the Cha-Cha-Cha for her reinterpretation of an iconic dance on DWTS.  Kirstie and Maks chose to recreate Carson & Anna’s season 13 cha-cha-cha on Dancing With The Stars All-Stars 2012 Season 15 tonight.  All the 11 remaining couples hit the stage tonight to reinterpret an iconic “DWTS” dance and face a double elimination on this week’s Dancing With The Stars.   If you missed the show, we recapped tonight’s show for you and if you want to see how all the couples did go HERE!

Kirstie Alley and and professional dancer Karina Smirnoff, dancing the Cha-Cha-Cha.  Maks said this about tonight’s dance, “I know it’s ‘my show’ but I wasn’t part of that script where they decided to do an iconic dance. Ha! I think what it is, it’s fitting for the All-Stars season. All these stars have already done something that was amazing, so they’ve been brought back not to do better but to probably do different.”

Judges’ Comments:  Len: “I want the celebrities to be in charge of the choreography every week, it was the whole package.”  Bruno: “I nearly burst a gut, it was the most fun I have had up to now.”  Carrie Ann: “Thank you, that was the most I have had, it was perfect and your best dance this season.”

Watch the video below and let us know what you think? Do you Kirstie did enough to win the Mirror Ball Trophy? Sound out in the comments below!