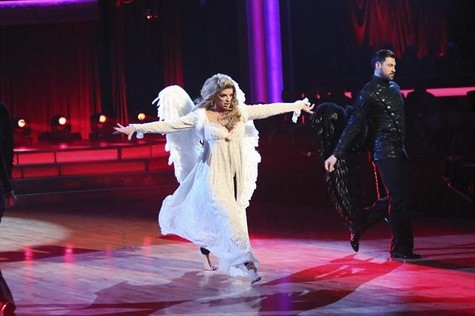 Kirstie Alley and Maksim Chmerkovskiy were eliminated during tonight’s elimination episode on Dancing with the Stars All-Stars. Kirstie and Maks had an extremely bad run during the first week of dancing with the second lowest score of the night and they only slightly managed to bump themselves up by about 2.0 points during the second week of dancing – they went from 19.0 during week one, to 21.0 during week two.  On week 3 their performance, for the first time this season, was absolutely excellent.  Their points, however, did not reflect the critical praise by the judges, as Kirstie and Maks suffered from a tied second last place score of 24.0.

On last night’s show Kirstie Alley and Maksim Chmerkovskiy danced the Viennese Waltz – The low scoring couple received wonderful scores and critique from the judges. Len said it was their “best dance ever”, Bruno called it “stylish”, and Carrie Ann thought their “lines were perfect.” All three judges scored them 9 points. Their first dance score was 27 – One of their highest scores of the season. In their second dance of the night, the couple was joined by Tristan McManus for the Paso Doble. All three judges disliked the trio dance. Len thought it “lacked finesse”, Bruno thought it “could have been more defined”, and Carrie Ann thought it “was a little sloppy for a Paso Doble”. All three judges scored the trio 8 points. Kirstie and Maks’ GRAND TOTAL SCORE – 79 – the lowest score for the two weeks of competition, 12.5 points below the second lowest score of Apolo and Karina.

This was, however, still not enough to save the actress and her dance partner with a last name manufactured in a Russian Vodka mill. Three seasons ago, Kirstie didn’t do “Look Who’s Talking Once Again”, no; she was a contestant on the 12th season of DWTS and came second in the finale with a perfect score of 30 points.