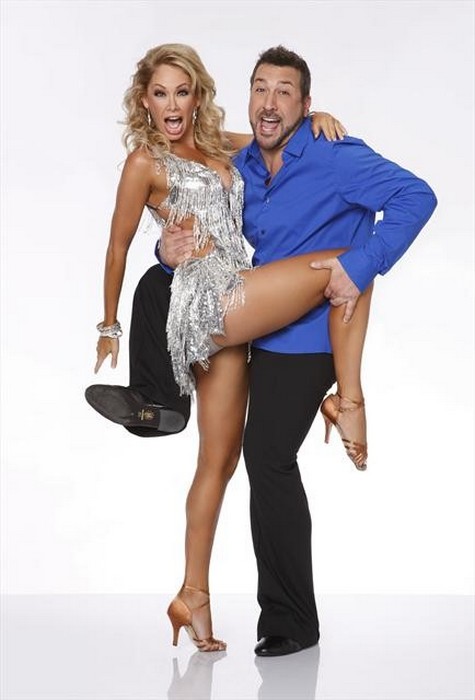 Joey Fatone and Kym Johnson were eliminated during tonight’s vote-off on Dancing with the Stars.  Their lackluster Quick Step was critiqued for lack of technique, poor posture and bad footwork, but all of the judges still gave the dancing couple 7.5 points. Joey and Kim scored 24 points during their 4th season on the show. Joey and Kym fell to the bottom of the average score pack with a lackluster 21.5. Their previous season average was 27.5. Total score: 22.5

The judges had this to say about his performance last night: Len:  “Poor posture, bad footwork.. but I really enjoyed it. If you can’t dance much, come out and entertain us and that is what you did.”  Bruno: “You do entertainment and we love you for it. Yes, technically it could have been better, there were some mistakes.”  Carrie Ann: “We are looking for technique, but I love fantastic performances and that was what we say, except for a few mistakes.”

During the first week of dancing, Joey and Kym scored a 27.5 while Pamela Anderson and Tristan MacManus were ousted, with a low score of 21.5. This week’s dancing performance put their average score to 22.5, but unfortunately, the score placed them in the bottom All-Star grouping.  Still their elimination was a shock to fans of the show, as our poll on Celeb Dirty Laundry showed that they were not in jeopardy of being eliminated. Should they have been eliminated? Why didn’t the terrible Bristol Palin and Mark Ballas leave? Let us know in the comments below!