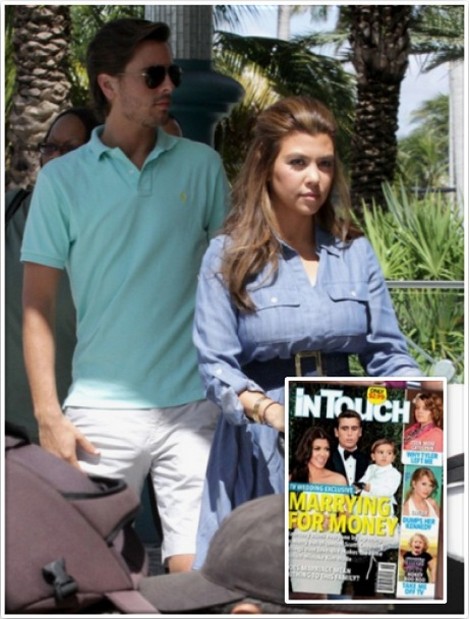 The current issue of IN TOUCH magazine features the cover story “TV Wedding Exclusive – Married For Money.”   This week the magazine has an exclusive story on the upcoming nuptials of Kourtney Kardashian and Scott Disick.  The story is an exclusive from a family friend, who is confirming that the couple who have two children together, Mason Dash Disick and Penelope Scotland Disick are planning to marry before the new season of Kourtney’s reality show Kourtney & Kim Take Miami.  They are going to have to get hitched fast, since the show picks up with their new season in December.

IN Touch has the scoop:  Scott is already shopping for a ring. “He was at Levinson Jewelers in Fort Lauderdale on Oct. 25,” says an eyewitness, noting that the cameras were rolling. “He was looking at really big, expensive diamond rings. They’ve already begun the planning and she’s even given the green-light to televise their nuptials.  She and Scott have met with a wedding planner,” another friend confirms to In Touch. “And they’ve narrowed down the date — the wedding is scheduled to take place after Christmas but before Easter.”

It hasn’t been a chapel of love the past few years for Kourtney and Scott, as they have battled numerous obstacles to be where they are today, but ever since Mason and Penelope popped out of Kourtney, she has had a bit of a change of heart.  The only explanation can be TV ratings, because two kids definitely hasn’t slowed Scott down, he is always photographed partying without her.  Most recently he was seen partying hard and drunk in Las Vegas.

Nothing is sacred to these too, not even marriage.  Everything Scott and the Kardashians do is for ratings and relates to one of their million shows.

To find out more on how Kourtney is marry for money, pick up the current issue of In Touch on stands now!