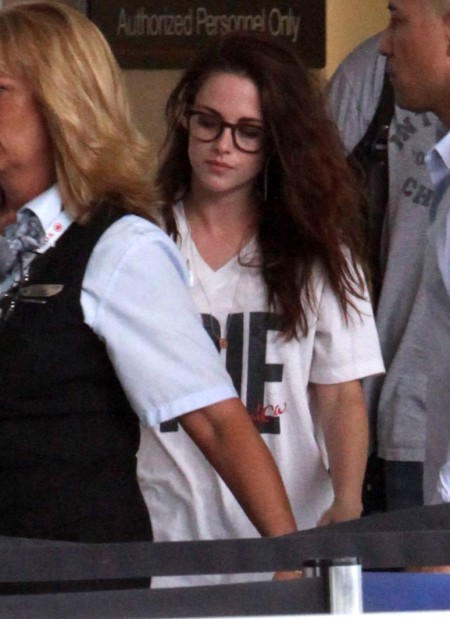 Even after reports that Robert Pattinson has finally forgiven his trampiric ex-girlfriend and the two are back to hiding out together, Kristen Stewart can’t seem to escape from her demons – or rather, the children of her demons. She refuses to move on from what she did to Rupert Sanders’ children.

A source told Closer magazine (yes, that Closer magazine): “She feels like the scarlet woman and says she can’t forgive herself for hurting Rupert’s children. She’s said she doesn’t care about her career taking a hit, but was crying, saying: ‘Those poor kids. I never meant to hurt them.'”

Have you ever been around someone who has to worry about something at all times? I can be like that but I know people much worse and this reminds me of what Kristen’s doing. She probably should have been upset about what her actions did to Rupert’s kids all along but she was mostly fixated on whether Rob would forgive her or not. Well, apparently he has, and now she can just move on to worrying about something else. Go down the list! It’s long! But how many of you believe Kristen doesn’t care if her career took a hit? Surely not me especially because of what she said at TIFF. I caught her in a few interviews and she reiterated how much she loved acting and how she couldn’t or wouldn’t want to do anything else in life. I believe her. She might have been total sh-t in Snow White and the Huntsman but that doesn’t mean she doesn’t really care about her career. Maybe care so much she would start small little rumors so fans don’t want to spit on her anymore? What? No!

Just saying, Kristen cares about her career – A LOT. She’s not beyond playing a few little shady games to make sure she continues to have a good one. She might be upset she hurt Rupert Sanders’ kids when she enticed their father into her Mini Cooper and made a piece of sh-t man out of him, but the only reason she can say she doesn’t care about her career taking a hit is because it hasn’t. Pure and simple. If her career was affected negatively by all this then I’m sure she’d be saying she couldn’t forgive herself for that instead.

What do you think about Kristen’s sympathy? Can she only now think about the kids because her life seems to be back on track while their parents have probably split up for good and they have to live a whole ocean away from their father? Or should we give Kristen a break because she’s at least thinking about people other than herself?