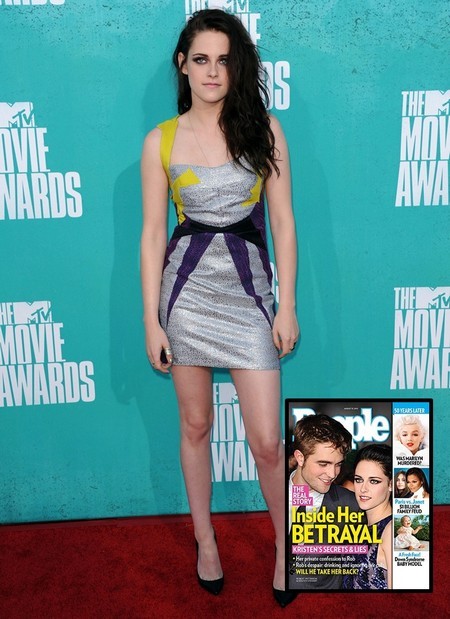 Robert Pattinson is crushed and broken – betrayed by the woman he loved, Kristen Stewart. What was Kristen thinking while she carried on a sordid affair with Rupert Sanders, a married man with two kids? How did Kristen justify stealing secret kisses with her director of Snow White and the Huntsman while she was also living and sleeping with Rob? How did Kristen feel as Rupert kissed and touched her naked body when Rob has been doing the same thing the night before?

Well the answers are in the current edition of People Magazine.  People’s cover promises to expose the many lies and secrets of the cheat as they tell the real story behind Kristen Stewart’s betrayal of Robert Pattinson.  One story I want cleared up has to do with Kristen and pregnancy.  We at Celeb Dirty Laundry reveal that sources claim that Kristen might be pregnant!  An added problem is that she doesn’t know whether the father is Rupert or Rob.  I suppose a DNA paternity test can help sort out that issue.  Speaking of pregnancy – I guess Mariah Carey didn’t really sleep with Justin Bieber and get pregnant after all.  Time has a way of sorting out certain ugly rumors, doesn’t it?  Too bad Kristen’s affair with Rupert is no rumor…

His world shattered, Robert Pattinson turned to someone he knew he could count on: Reese Witherspoon.

Immediately after learning his girlfriend of three years, Kristen Stewart, had cheated on him with her married Snow White and the Huntsman director Rupert Sanders, Pattinson asked his friend and Water for Elephants costar if he could crash at her tranquil estate in Ojai, Calif.

Pattinson was utterly blindsided by the news – which a distraught Stewart delivered just before the story broke July 24 on PEOPLE.com – sources tell PEOPLE in this week’s cover story.

“There was no sign that either of them was unhappy,” says a source close to the 26-year-old actor. “He would have done anything for her.”

While the source says Pattinson has had his “heart ripped out,” a Stewart insider says the Twilight heroine, 22, is likewise devastated.

“Telling Robert was the worst thing she’s ever had to do,” says the insider.

People also covers the Janet Jackson versus Paris Jackson billion dollar battle royale.  Sadly for Janet there will be no winning this war – all issues were decided by Michael Jackson’s will.  No matter how many battles the jealous Janet wages she will lose in the end.

People also has an expose on the 50 year-old question ‘Was Marilyn Murdered?’

All of the issue promises good reading – I’ll be reporting on what I learn later in the week.