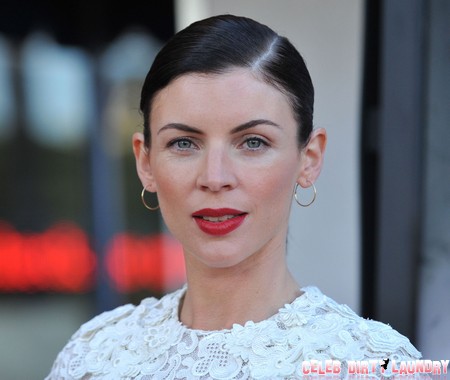 Liberty Ross has ditched her wedding ring and is letting her cheating snake of a husband, Rupert Sanders, know that she won’t be having him back any time soon.  Rupert had long and steamy affair with trampire Kristen Stewart which was outed by Us Weekly two weeks ago with plenty of photographic proof.  Since then, Kristen made a moronic public apology for her ‘momentary indiscretion’ and her ex-boyfriend and Twilight co-star, Robert Pattinson, unceremoniously dumped her.

Meanwhile Robert seems to be slowly recovering his emotional equilibrium – appearing out clubbing with pals and planning a TV appearance next week. Whatever private understanding Kristen and Rob might have had about fooling around with others apparently didn’t include getting caught and being subsequently outed by popular gossip magazines.  I was never convinced that Robert and Kristen were not a showmance until this affair became public.  Now it truly does seem that Rob and Kristen had a love affair of some sort.  Both of their reactions seem too real at this point to be merely for show.

TMZ tells us the story and has the exclusive pics of Liberty unchained: While her cheating husband has been seen still wearing his wedding ring after being caught having an affair with his “Snow White and the Huntsman” actress Kristen Stewart, director Rupert Sanders’ wife Liberty Ross surfaced without her wedding ring in L.A. on Monday.

While neither Liberty nor Rupert have officially filed for divorce, the wronged mother of two — who looked chic in a navy suit — appears to be sending a loud and clear message about the status of their relationship.

As far as Liberty and Rupert, we predict that it is all over but the crying, his crying.  Despite Rupert’s protestations that his affair with Kristen was the ‘worst mistake of my life’ we doubt it was his only episode of infidelity.  What makes him so upset was that he got caught, that’s all.  Same with Kristen.  We hope that Liberty divorces Rupert – go girl go!