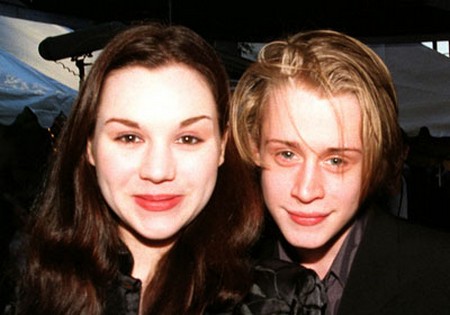 Macaulay Culkin is sad and lonely. The former child star’s struggle with heroin and prescription narcotics destroyed his eight-year-long relationship with Mila Kunis and drove her away.  In fact Mila was driven right into the arms of that total sleaze, Ashton Kutcher.   I’d say Mila was better off with the part-time junkie than with Ashton – at least Macaulay has intelligence and character, even if he is a bit messed up.  But Mila moved on apparently unable to deal with her Macaulay destroying himself through dissipation and addiction.  Mila couldn’t even bring herself to attend Natalie Portman’s wedding since Macaulay was there – she just couldn’t handle seeing her former lover in his current pathetic state.

A source claims, “Mac is lonely and desperate for love, he needs help and has no one to turn to. He hasn’t been able to get over his split with Mila almost two years ago, and he can barely look at happy photos of her with her new boyfriend Ashton.”

So what is poor boy to do? Well according to the National Enquirer print edition, October 8th, Macaulay is courting his ex-wife, actress Rachel Miner.  Rachel and Macaulay married in 1998 when they were just 17-years-old and of course the relationship didn’t last.  Since divorce has become relatively easy in America you don’t see many marriages between minors last too long.  Rachel and Mac separated in 2000 and divorced in 2002.

“Mac’s not sure if Rachel is interested in having a romantic relationship again,” added the source, “but he’s going to try to convince her to give him a second chance.”

I don’t know if I think that Rachel is really in a position to give Mac a ‘second chance.’  I think Mac could be giving Rachel the second chance – and she’d be wise to take it if it is offered.  Despite his obvious problems and alleged drug issues, Mac is a huge star who can do plenty for Rachel’s career – her career hasn’t been exactly stellar over the past decade.  In fact Rachel is solidly C-list, verging on D-list. My concern is that she might be sniffing around Macaulay seeking personal gain, not love, and in his weakened doped up state he is obviously vulnerable to the wiles of a pretty woman.