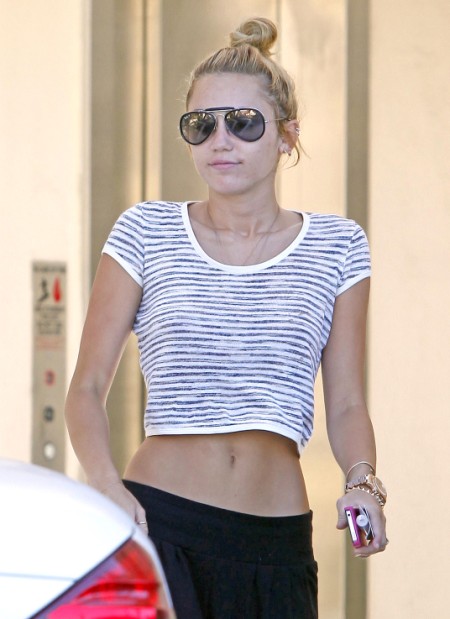 There’s nothing like some good ‘ole side boob to keep a relationship going, thinks Miley Cyrus. Nude photos of the actress were uncovered when the photographer Miley had shoot her sans clothes uploaded the results prominently on his website for all to see!

The Huffington Post reports the photos were taken by Vijat Mohindra over a year ago when Miley worked with the photographer for her Gypsy Heart Tour in the spring of 2011. Miley’s boobs would have been about 18 at that time.

HuffPost also goes on to say that the pictures were intended for Miley’s fiance, Liam Hemsworth. There are about six with Miley is difference degrees of nakedness. You can check them out here. You can tell they aren’t that recent because she doesn’t look like she’s addicted to the pilates studios yet or going gluten free y’all.

I never quite understood taking naked photos for a dude. Why would Liam ever carry them around and think to himself, ‘Hey! I’m bored so I’m going to look at my girlfriend’s dreamcatcher tattoo and side boob!’ Whatever happened to the imaginations of our nation’s youth? However, the photos are tasteful and not vulgar which is a plus for Miley. If you’re going to pose naked, do it with class!

Perhaps Miley should think about getting them updated? You know she’s proud as all hell about her pilates body. Rumors are now circulating she lost 20 pounds with all those pilates 100s, seals, grasshoppers and rolling like a balls (yes, those are real moves). And it might be a nice conciliatory gesture since Liam kicked her off his Paranoia set because she was just getting too annoying to keep around. She could get him some new pics so she can rest easy 2,000 miles away. Or maybe not? Miley’s not the most secure when it comes to that relationship!

What do you think of Miley posing nude? Is it a little too early in the relationship to be taking those kinds of measures or is it a cute gesture to show your future hubby what he’s missing when you’re not around?