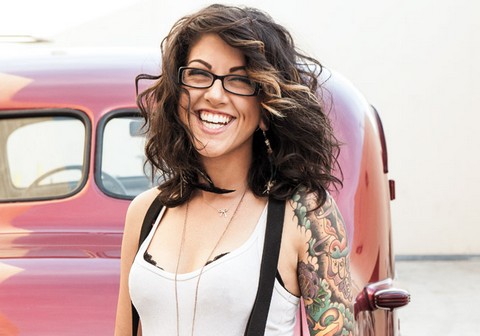 We all have skeletons in the closet, but Olivia Black’s skeleton is dressed in lacy lingerie and covered in tattoos! That’s right—the newest addition to the show Pawn Stars has a collection of raunchy pictures spread across the internet, waiting for die-hard fans to find. “Olivia doesn’t talk about her porn past,” a source told National Enquirer, print edition December 24, 2012: “but all the guys and the crew know about it and have seen her photos.” The 27-year-old was selected in 2008 to appear on a soft-core website, which offers punk and goth pictures through a paid membership. We expect her parents are glad she’s moved to pawn!

Olivia dreamed of being a model, but her height (she’s only 5 foot 2) held her back. She worked as a hairdresser and makeup artist in Las Vegas and applied to work at Gold & Silver Pawn Shop last year, when she was strapped for cash. She had no idea the store was going into it’s fifth season on the History Channel, and producers gave her a chance, despite her sexy past. “It’s one of the best-kept secrets from viewers,” the source says.

But Olivia doesn’t want to stay on the show forever. Despite the unexpected career turns she’s taken, she’s always had her eye on the prize. “Olivia loves her gig on Pawn Stars, but her nude modeling isn’t necessarily in the past. She would never do anything to upset the show’s producers or her pawn shop bosses, but if Playboy called her right now and asked her to pose in the buff, I’m sure she wouldn’t think twice about shedding her clothes and saying cheese!”

It sounds like Olivia has a pretty good head on her shoulders! Soft core isn’t that bad to employers, is it? And now that she’s landed a real TV gig, she has a foot in the door on her way to modeling. It’s all baby steps, but she’s on the right path! Would you expect Olivia to have this secret past? Should she just come out and confess, or is it taboo?