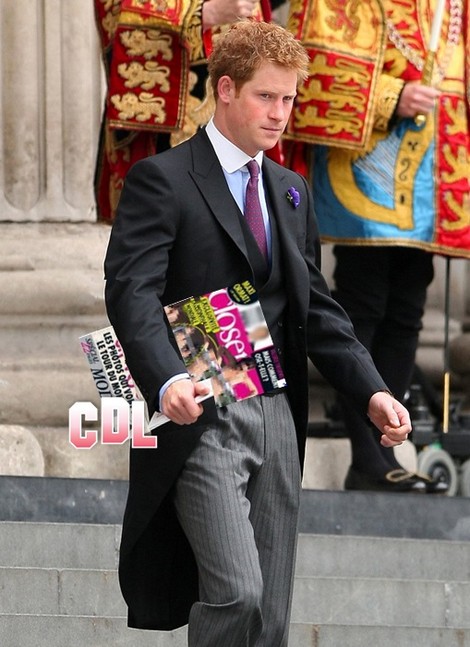 Topless photos of Kate Middleton have been all over the Internet recently. Sneaky photogs managed to capture Kate and Prince William sunbathing in various states of undress (it’s hard to sunbathe fully clothed) at the estate of Queen Elizabeth’s nephew in France.  The thieves then promptly sold the snaps to an agency, which in turn distributed them to several scandal rag editors across Europe, who printed them, including in France’s Closer Magazine.  Those of us who are appalled at this greedy invasion of royal privacy were relieved when Kate and Will won a judgement today in their civil case against Closer.  While this injunction prevents further distribution of the offending issue of Closer, it doesn’t do much to contain the spread of those copies already printed and sold.  Not to mention that the Italian Chi Magazine is still spewing out copies of an issue with its own large gallery of topless Kate specials.

Disgraced former Italian Prime Minister Silvio Berlusconi’s Mondadori publishing house happens to own both Closer and Chi.  As a non-British entity it is understandable that Mondadori has no particular allegiance to the British Royal Family.

Everyone knows that Prince Harry and Kate enjoy a friendly, even jovial, relationship.  Some have suggested that perhaps Harry and Kate have engaged in some harmless flirting.  It has been reported that William has not taken kindly to all of this, looking askance at his wife and brother’s familiarity as it offends his princely sense of dignity.  Needless to say, whatever sense of dignity Harry was endowed with vanished long ago.  We reckon it left him somewhere between his Hitler impersonation and one of his many public drunks, long before his recent Las Vegas naked photo scandal.

Sadly, we learned of a shocking development that threatens to undermine Will’s relationship with his wayward brother.  It seems that Harry’s commanding officer at a secret base in Afghanistan surprised the prince studying a copy of the banned and illegal Closer Magazine!  Commander English was forced to confiscate the contraband and file a formal complaint with the Royal Air Force.  Nothing nice can come of this.

Reports reaching us claim that William hit the roof upon learning of Harry’s betrayal.  Queen Elizabeth just can’t get over this latest blow to the royal reputation and has warned palace staff not to inform Prince Phillip.  Word is that spiteful Camilla Parker Bowles, long a bitter rival of Duchess Kate’s, was spotted handing out copies of the banned magazine at Piccadilly Circus.

Of course we are joking around here – a little harmless fun, nothing more.  But this has to be less offensive than those posts we see entitled ‘Ashton and Mila to Adopt!’ followed in the post by a description of the puppy they are considering.