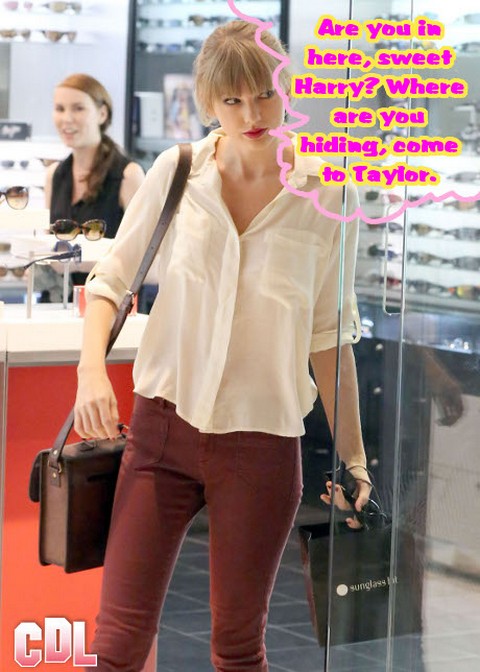 Taylor Swift sure does have a way of making a huge impression on the people that are close to her current man- whoever he may be!  Let’s not forget how much the Kennedy women hated her when she was way too cozy with one of their own! The young star has recently gone public with her budding relationship with Harry Styles (Don’t you love how this girl parades every guy she dates?  It makes it easier to publicly shame them in a song when the relationship fails!) and apparently his fellow One Direction band mates are not Taylor Swift fans, at all. In fact the guys believe that Harry is completely under Taylor’s thumb and his whole life has done a complete 180 since getting together with her.  The guys fear that he’s going to do whatever Taylor wants him to do and that could ultimately lead to the demise of 1D!

I have to wonder why a guy like Harry- who can pretty much get any girl he wants- would gravitate towards Taylor. I know she plays the role of the country sweetheart, or at least that’s what her PR people try to convince us that she is, but don’t her actions really raise some eyebrows? I mean, she has this wholesome image but then hops from guy to guy to guy. She’s spotted creeping out in the previous nights’ outfit and people overlook it. She swings hard and insults those she has claimed to love, usually in a song and just because the sentiment is relatable, she still ends up the sweetheart. Let’s be real here. Taylor gets around and her relationship track record sucks. At some point you have to think she is also doing something wrong, something a bit more than picking the wrong guys!

If Harry really is under her thumb and totally focused on her then maybe those pregnancy rumors are true. Why else would this boy-bander be risking his own image and his job for a woman? It has to be a pretty big reason, don’t you think?  Do you think Taylor is a total sweetheart or does she put her guys on a leash so tight that she eventually loses them? Tell us your thoughts in the comments below!