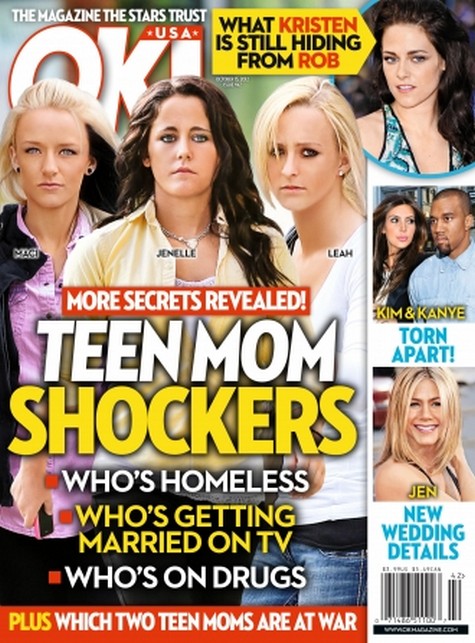 The current issue of OK! Magazine features an update on the stars of MTV’s Teen Mom and Teen Mom 2. The cover photo shows Maci Bookout, Jenelle Evans, and Leah Messer, and even though the Teen Mom reunion special was just a few weeks ago, it sounds like the girls have gotten themselves into trouble again. Last we saw, Maci Bookout was single after dumping boyfriend Kyle King because of a cheating scandal. Since then she’s been flirting with her ex-boyfriend Kyle Regal, partying with friends, and making bad choices about her hair coloring.

Jenelle has never been the sharpest knife in the drawer, and her season of Teen Mom 2 showed a young girl who wanted it all: drugs, free money, and a baby. Well, she and on-again-off-again boyfriend Keiffer Delp are off right now, and hopefully he’s taken his cocaine with him! Mother of twins Leah was last seen struggling with husband Corey Simms after he decided to buy a new truck instead of a mobile home that didn’t have black mold in the bathtub! The new season of Teen Mom 2 should start in December or January, so we won’t have to agonize about their wellbeing much longer!

Also reported, Jennifer Aniston and Justin Theroux are rushing to beat Angelina Jolie and Brad Pitt to the altar. Jennifer is delusional and thinks it’s a big game! She and Justin are “plotting a secret, intimate wedding in New Mexico.” Maybe she is going to try to pull an Anne Hathaway and spontaneously have the perfect, small wedding, but I think that Justin will run before she ever puts on a white dress. We previously reported that Jennifer was hinting that he needs a bit of plastic surgery before any wedding pictures are taken, and his nose hasn’t gotten any smaller, so we’ll probably be waiting a little while longer! Justin is a clueless guy who got roped into Jennifer’s messy plans for revenge, and like Angelina said, their wedding will never happen!

We’re buzzing with the reconciliation of adulteress Kristen Stewart and part-time vegetarian vampire Robert Pattinson, and the internet wants to know: is their entire relationship, affair, and reunion just a publicity stunt? OK! reports that since he forgave her, “Robert Pattinson forbid Kristen Stewart from talking to Rupert Sanders.” Kristen, never one to accept boundaries, may be testing Robert’s boundaries by maintaining contact through texting! Considering that his wife, Liberty Ross, has been seen out with former lovers, the guy has nothing to lose and probably wants Kristen back. The couple are scheduled to appear together at the end of October for Twilight promotional work and body language experts will be working overtime to dissect their every move.

Finally, Kim Kardashian and Kanye West may be on the rocks. The relationship has been bizarre and obsessive from the start, and Kim is worried Kanye is putting a little to much out there. A few weeks ago he tweeted that he just “f*cked Kim so hard,” and now a sex tape is circulating that isn’t providing very positive reviews. We also heard that Kim bumped into her ex Ray J while dining in Miami—he’s the guy who costarred in her first sex tape. Kanye is such a control freak, I doubt he was very happy about it.

Find out more—check out the current issue of OK! which will be on newsstands tomorrow!