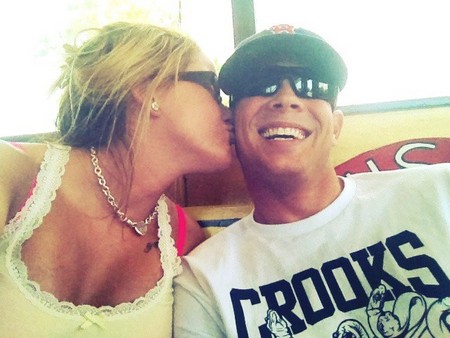 It was beginning to look like Teen Mom 2’s Jenelle Evans and Gary Head were done for good. Jenelle was back with her old flame, Kieffer Delp, and Gary seemed like he was trying to move on.

All that changed on Thursday night, however, when Kieffer ripped up drawing that he’d made for Jenelle, and uploaded a picture of the ripped up remains, along with the message, “It was all a lie but best friends means I pull the trigger best friends means yu get what yu deserve.”

When concerned fans inquired, he tweeted, “I’m ok me n Jenelle are done but I’m good.”

Minutes later, Jenelle followed up with a tweet, “Guess this means I’m single.”

So what happened this time? According to Kieffer, “[Jenelle] told me that she was just gonna talk to [Gary] anyway so I was like [alright] then I’m going back to [New Jersey].”

It is unclear whether Kieffer has already gone back home to New Jersey, or whether he is still in North Carolina, but one thing is for sure, he seems to be the one most upset by the break-up, as his tweets the past two days have been a mix of heartfelt emotion and trash-talking Jenelle, with posts such as “From the third day I knew her until last Thursday I loved her with every little bit of love I’m capable of generating now no,” to “Def hit that two weeks [before] they got together and for a year [before] that I got her nice and stretched.” Way to keep is classy, Kieffer.

He also claims Jenelle is still texting him, but says he is not responding.

Jenelle, however, seems to have less to say about the break-up, at least publicly. Asked if she cheated on Kieffer with Gary, Jenelle replied, “No I would never do that, we just didn’t work out this time.”

Kieffer, however, seems to think Jenelle never really loved him. “She doesn’t want me Gary was acting up and bam there I am,” he tweeted Thursday.

Jenelle initially said she would not get back together with Gary, but just two days later, she appears to have changed her mind, for less than an hour ago, she tweeted, “Me and [Gary] have made it official we r dating now.”

Some have predicted that she will be back with Kieffer in no time, but naturally, Jenelle denies this. “I didn’t take kieffer back once he got out of prison.. Why would I take him back now when it never worked out the first time?”

Sure Jenelle, whatever you say. Let’s see how long this lasts.