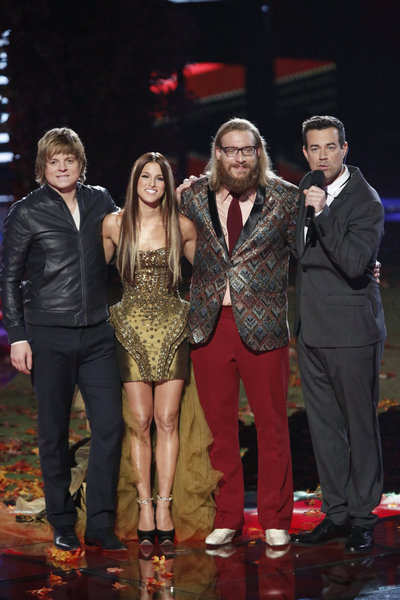 After weeks of auditions, battles, voting, and vocals, three contestants remain in the finale of The Voice – Nicholas David, Cassadee Pope, and Terry McDermott. Current trends – and our official Celeb Dirty Laundry poll – indicate that Cassadee Pope will win the competition. In an official poll we ran last week, Cassadee was in the lead with 36.19%, while Terry was a close second with 32.82%, and Nicholas was trailing behind with 30.99%. It’s still a very, very close race, and any of these three could still cause an “upset” and take home the prize. So, without further adieu, here’s our official Celeb Dirty Laundry review of the finale performances and our predictions. Remember to vote in our finale poll and let us know who should win The Voice Season 3.

Nicholas David – Great Balls of Fire by Jerry Lee Lewis & Lean On Me by Bill Withers – Nicholas, the eccentric and unique singer, delivered two performances worthy of praise. Yes, it might not have been contemporary enough for modern day audiences, but it was definitely worthwhile. Nicholas is able to channel nostalgia; and nostalgia sells. However, the manic rocking during Great Balls of Fire might have been a bit too theatrical for the general voting blocs, but at least it wasn’t a horrible performance. On the other hand, Lean On Me was subdued, subtle, and absolutely beautiful. OUR PREDICTION – Nicholas might not win the competition, but he will definitely make an impact on the niche genres in the music industry. It will be interesting to see whether Nicholas regains his composure after the show and becomes a best-selling artist. It’s not likely, but it’s possible.

Cassadee Pope – Over You by Miranda Lambert & Cry by Faith Hill – Cassadee has a very, very strong chance of winning the competition. She has been able to tap into a raw voting demographic and juice it for all it’s worth. Her defining song, Over You, was absolutely splendid! She delivered each note with heartfelt emotion and pitch perfection. It was one of her best performances to date. Her second song, the Faith Hill classic, was unfortunately more Taylor Swift than Faith Hill. However, one man’s garbage is another man’s gold… OUR PREDICTION – Cassadee will in all probability win this competition. She might not be the best singer out of the three, but her tween demographic and excellent song choices will most definitely win over enough fans to give her the title of The Voice.

Terry McDermott – Broken Wings by Mister Mister & I Want To Know What Love Is by Foreigner – Terry’s first song, Broken Wings, started off a bit rough. He missed a lyric or two and dropped off the pitch. It could have been the song, but Terry didn’t connect on that deep emotional level we’re so used to. Also, when he hit one of the upper notes, his voice went as thin as Gladwrap. Terry’s rendition of the seminal Foreigner hit thankfully brought him back to our hearts and minds! His emotive control over the difficult vocals forced us to re-evaluate the entire competition. It was a superstar performance. OUR PREDICTION – Terry is a strong contender, especially for the middle-aged demographic, but both of the guys in the competition are being absolutely dominated by Cassadee and her weekly demolition. A stroke of luck might give him the title, but it will be a very difficult battle.

What did you think? Who was your favorite? Who do you want to see win the competition? Who are you voting for? Let us know your thoughts in the comments below and remember to vote in our official The Voice finale poll. We tune in so you don’t have to tune out!