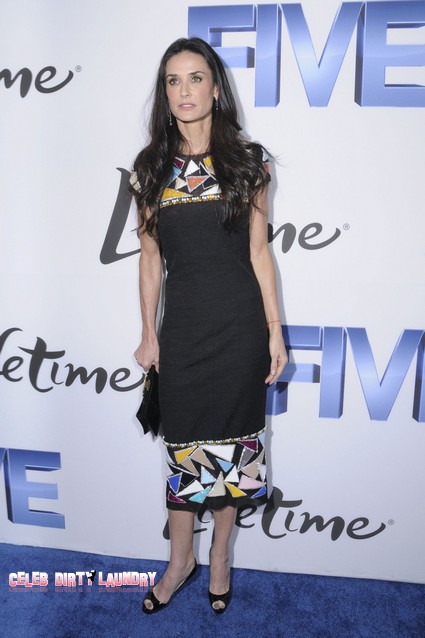 The consequences of Demi Moore‘s emergency drug-related hospitalization are already being felt throughout Hollywood.  TMZ says that Demi has suddenly dropped out of her upcoming movie appearance in “Lovelace.” According to Demi’s reps they just got word she will no longer do a cameo for the flick.

As we reported earlier, Demi Moore just can’t seem to handle life anymore – after her calamitous split from Ashton Kutcher. Demi was rushed to hospital last night with a substance abuse/drug overdose related issue. Paramedics who responded to a 911 call were so concerned that it was a risk to leave Demi at home that they insisted on taking her to the emergency ward. Speculation naturally arises as to whether this was a suicide attempt. Sadly, this is not the first time Demi is reported to be at risk for suicide since the collapse of her marriage with Ashton.

After the traumatic announcement of her divorce from Ashton she is in a very fragile condition. Following her public humiliation after the bimbo, Sara Leal, went public about her hot tub sexual affair with Ashton, Demi’s weight plunged dangerously – indicating serious unresolved emotional issues. We ask – did Demi attempt suicide last night?

Law enforcement sources report that a 911 call was placed at 10:45 PM PST Monday night asking for emergency assistance. When paramedics arrived they were extremely concerned with Demi’s condition and after assessing her for 30 minutes made the decision to rush her to a local hospital.

Demi was placed in a facility to “seek further professional assistance” for substance abuse.

TMZ has the 911 call from Demi’s home.  Demi’s rep says, “Because of the stresses in her life right now, Demi has chosen to seek professional assistance to treat her exhaustion and improve her overall health. She looks forward to getting well and is grateful for the support of her family and friends.”

We all know what that means – and it is nothing nice.