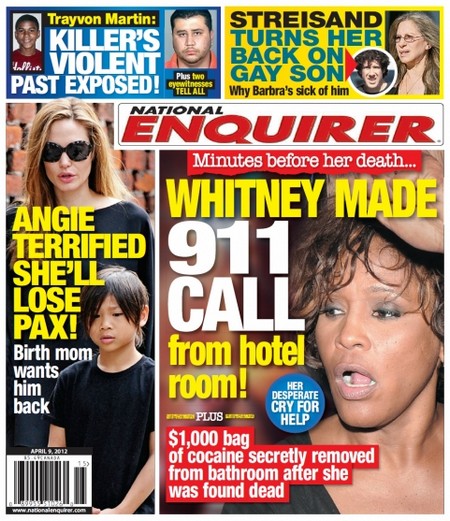 Whitney Houston died in her Beverly Hills hotel room and made a final desperate 911 call to try to save herself.   While the coroner has determined that Whitney’s cause of death was ‘accidental drowning’ the Beverly Hills Police Department are still investigating charges of foul play – especially as some friends and family of Whitney have expressed their fear that she was murdered.

Evidence has emerged that a $1000 bag of cocaine was removed from the bathroom where Whitney was found dead and suspicion for the ‘cleaning job’ rests heavily upon Raffles van Exel.  Van Exel is also suspected of being the man who took the final uncensored photo of Whitney in her coffin that appeared in the Enquirer.

This shocking news is revealed in the cover story of the April 9th issue of the National Enquirer.  Whitney’s desperate 911 cry for help is yet another indication that all is not yet known about the singer’s tragic death.  What did Whitney say in that final call for help?

Also in this week’s issue we learn that Angelina Jolie is terrified that she will lose her adopted son Pax.  It appears that Pax’s real mom wants him back…  We also learn that Trayvon Martin’s killer has horribly violent past – and that is not really that surprising, it?

Also covered in the issue are Barbara Streisand’s abandonment of her gay son and Paula Abdul’s third walk down the aisle… who is the lucky dude? Certainly NOT Simon Cowell.

Don’t miss our coverage later on the week of all the details of these amazing stories!