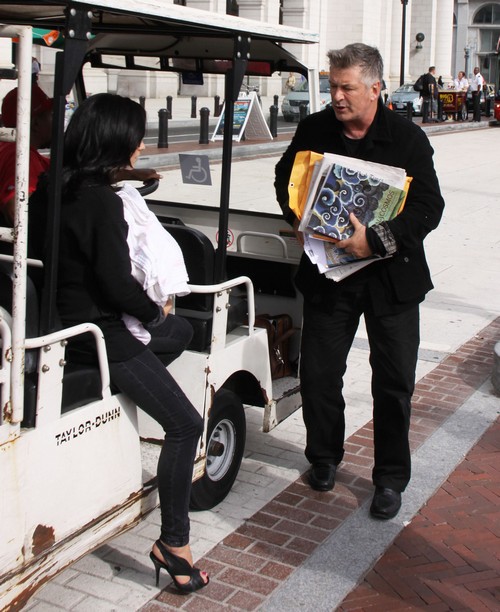 Like husband, like wife? Alec Baldwin‘s wife, Hilaria Thomas Baldwin, is at the center of some backlash after wearing a plunging neckline to a fancy D.C. function. The controversy’s been made worse by her comments, so she clearly comes from the Alec Baldwin school of diplomacy.

Alec and Hilaria both attended the Smithsonian’s new yoga exhibit at the Sackler Gallery in Washington D.C., and while Alec was reportedly on his best behavior, Hilaria’s sparkling and plunging Reem Acra gown reportedly didn’t go over too well with the D.C. elite, largely because it revealed ‘a cornucopian bosom.’

While plunging necklines are the norm in Hollywood, made popular by actresses, models and reality stars, they’re not really commonplace among the upper tier of D.C. society. The crowd included names like Dame Jillian Sackler, Sally Quinn, and exiled Empress of Iran Farah Pahlavi. Most of the women there were over 60 years old, and they were also mostly a ‘serious room of collectors’.

According to a report from Page Six, while some of the guests did give Hilaria props for standing in such a slinky gown for hours at a time, they also didn’t feel that her gown was very appropriate for such an event. They also reportedly didn’t like the fact that Hilaria addressed everyone as ‘you guys’, and they felt her general behavior wasn’t befitting of the classiness of the event.

Of course, the backlash would have eventually subsided if Hilaria ignored it, but like her husband, she doesn’t seem to have that capability. She took to Twitter to write, “Waking up to a column gossiping about my boobs… My official statement: my baby likes them and you liked your mommy’s too.”  Well lots of woman like their husbands’ penises, right, but they don’t insist on displaying them when in society. Is Hilaria as stupid as she sounds?

I don’t think she realizes that the majority of the backlash isn’t about the quality or lack thereof of her boobs – it’s about the inappropriateness of her dress at such an important event. But like her husband, she seems immune to taking criticism in a constructive manner.