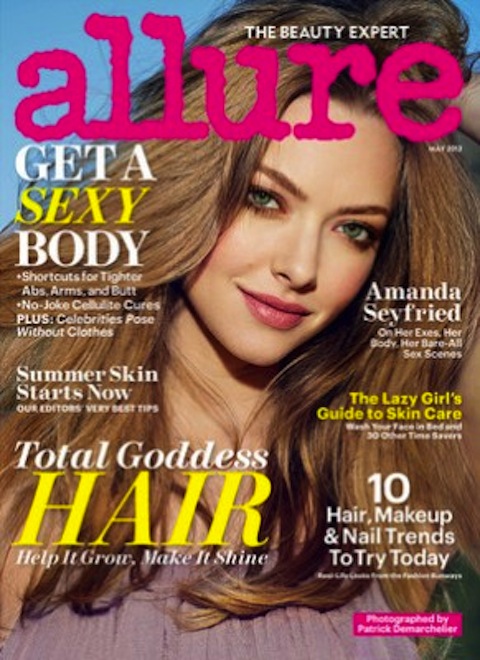 Amanda Seyfried isn’t afraid to talk about her assets and what areas of her career could use some growth. Her acting and singing chops have been put to the test as well as her deep-throating skills.

That’s right. In an interview with Allure magazine, the actress revealed that her role as Linda Lovelace really helped her singing skills when it came time to play her more virtuous character in Les Miserables.

“Imagine deep-throating a penis, get that feeling in the back of your throat, and then sing. That’s where your larynx is.”

Amanda Seyfried just taught you two new skills to add to your resume!

Despite being completely open about taking a knee, the Allure cover girl opted to leave her clothes on for the “Look Better Naked” issue. That left celebs like Naya Rivera, Jennifer Morrison, Clare Bowen and Christa Miller alone to bare it all.

The girls talked body image covering everything from self-esteem to surprising scars. Glee star Rivera confessed being self-conscious of her skinnier frame during her times as a Hooters waitress.

Similarly, Seyfried was also self-conscious of her body during her early years. Seyfried fondly remembers her size D breasts from her days on the set of Mean Girls. You remember those boobs? The ones that could predict the weather?

“There was something so beautiful about the size of them. When I look back, I’m like, Why did I always give myself such a hard time?”

And maybe the actress is still giving herself a hard time. Will she look back in a few years at her Allure appearance and wonder why she gave her C cups such a hard time?

Check out more pictures from the annual “Look Better Naked” issue of Allure!