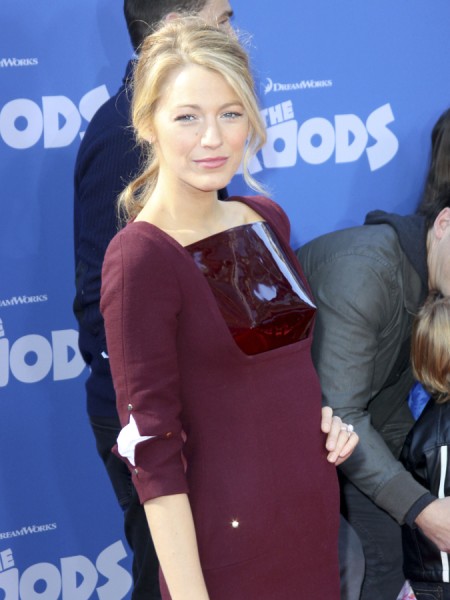 I have this obsession with wanting to hate Blake Lively. She’s too much. The hair, the legs, the perfect husband, the seemingly overwhelming happiness with life. Damn her cheerfulness! I thought I had her today. I thought her love affair with Hollywood was finally over. I thought she was going full-scale domestic goddess and playing Ryan Reynolds’ housewife for good. But I was wrong.

I have to blame Page Six first. It came out with an ass kissy story today about how Blake spent hours with Ryan Reynolds at the St. Charles showroom in the Architects & Designers Building picking out every detail of the super expensive French La Cornue stove for their upstate country house. It costs something like $25K. Source revealed she was naturally sweet and hugged everyone before she left while gushing that she was going to have to fight her brothers to bake with it. She’s a major Martha Stewart wannabe and had no major work lined up so I figured this was a natural next step for her in her homemaking career. But, again, I was wrong.

It turns out Blake’s career is on the upswing. After months of enjoying married bliss and staying out of the spotlight in the country it’s just been announced that she scored the coveted role of Freddie Mercury’s ex-girlfriend in the new Freddie Mercury biopic starring Sacha Baron Cohen. What the shit? How did that happen? Girls have been throwing themselves at this role. I know Katy Perry, Kristen Stewart and Lady Gaga were rumored to be pulling hair for it. Playing Mary Austin is a huge deal. If you’ve been reading here for awhile you’ll know I have been freaking out over this movie. It’s taken forever to get off the ground but I just heard Sacha’s been working with a vocal coach because he wants to do all the singing. Sounds like Oscar, right? Blake Lively in another Oscar nominated movie? God damn, she’s good! I don’t care about her acting. The fact that people like her enough to keep giving her chances is amazing. I’m not sure how big this role is or how much stretching she’ll have to do for it but I’m impressed. Anyone else?