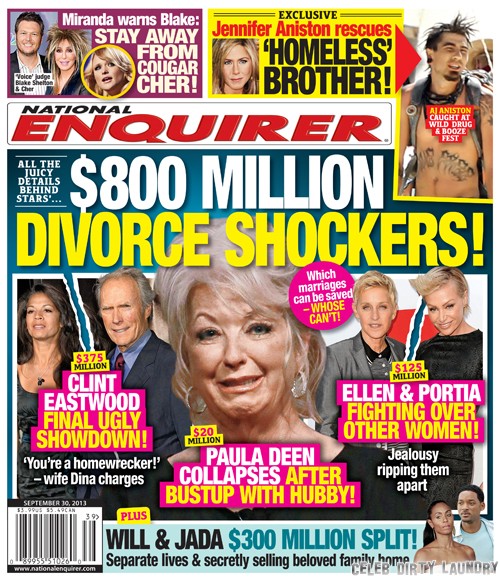 Has all the wife swapping over the past month caused Dina Eastwood and Clint Eastwood‘s divorce to implode and get really ugly? The latest cover of the National Enquirer reveals that Dina and Clint are in the throes of a ‘final ugly showdown’, and their divorce is spiraling into a $375 million battle.

Clint, obviously, is worth most of the money from his various directing and acting endeavors. But Dina’s accusation towards Clint of being a homewrecker are bound to get in the way of a harmonious divorce. According to the Enquirer’s sources, Dina is spitting mad about Clint’s relationship with Scott Fisher‘s wife, Erica Fisher. The sources claim, “Clint was smitten with her and liked the fact that she came on to him so aggressively. There was a big scene.”

The report claims that Dina caught Clint ‘redhanded’ with Erica, and although in a bizarre twist of fate, she later hooked up with Scott, she’s apparently going to make Clint pay for cheating on her.

The cover of the Enquirer also features a story on Paula Deen collapsing after a fight with her husband, and Will Smith and Jada Pinkett Smith living separate lives and selling their family home.

In addition, Ellen Degeneres and Portia de Rossi are reportedly fighting over other women, and jealousy is ‘ripping them apart’.

In the latest ongoing saga of Miranda Lambert‘s and Blake Shelton‘s crumbling marriage, Miranda has apparently warned Blake to stay away from the ‘cougar Cher‘. And finally, Jennifer Aniston rescues a homeless brother – quite different from the pregnancy stories about Jennifer that are permeating the web everywhere else.

What do you guys think of Clint and Dina’s divorce issues? And what do you think of the rumored relationship troubles between Will Smith and Jada Smith, and Ellen and Portia? Let us know your thoughts in the comments.