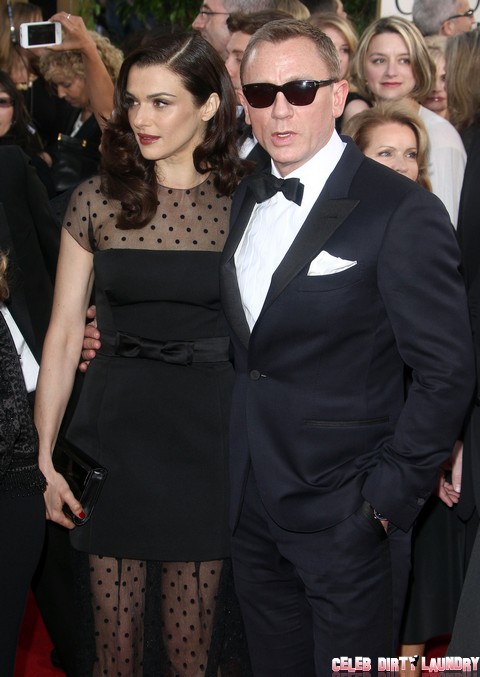 Rachel Weisz has threatened to divorce Daniel Craig if he doesn’t quit playing James Bond. The actress has noticed sudden changes in her husband; he seems to care more about his rising fame as the 007 agent than spending quality time with her. The latest of the franchise, Skyfall, has grossed over $750 million worldwide – making it one of the biggest movies of 2012, but with all that success comes a lot of fame.

According to sources for Perez Hilton, Craig feels pressured to live up to his 007 Bond title and has therefore started pushing his marriage priorities to the side so that he can focus more on his career and his fans who have supported him throughout the years. At award shows, Craig dresses up in a black tuxedo and dark shades – notably something that James Bond would do – to live up to his character’s persona.

Rachel is starting to believe that Daniel is more in love with James Bond than he is with her. When the couple have arguments over the whole thing, the 44-year old tells her he sees nothing wrong with the way he’s behaving, explaining to his wife that she has to adjust to the lifestyle. If the disputation tends to get even more heated, Craig simply removes himself from the situation and leaves the house for a couple of days without informing Weisz where he has gone. Their love life has been said to be non-existent since Daniel started filming the latest Bond movie, which has made Rachel realize that eventually, if things don’t get any better, she will pull the plug and divorce her husband for good.

A source explained: “Daniel’s popularity has soared since playing James Bond and he’s often asked by fans for a picture. He is very aware of the duties of playing such a famous character and always stops to give fans what they want. He never shirks his responsibilities.“

Daniel has already been approached to reprise his role as James Bond, but the actor has yet to sign on to do it. By the looks of things, it’s clear to say that if Craig does end up signing on for the movie, Rachel will no longer put up with the way things have been. She’ll definitely end up leaving him.