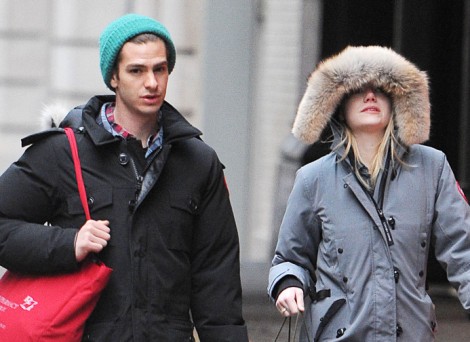 Emma Stone and Andrew Garfield usually keep things pretty tight between themselves. They’ve got a Naomi Watts/Liev Schreiber vibe going for me. They hang in NYC together most of the time. They get papped occasionally but that doesn’t stop them from doing what they do. You’ll catch them kissing, holding hands and other young love canoodling from time to time. It’s adorable because I happen to think they’re adorable. Obviously it depends on the couple. When Kim and Kanye do it I almost always throw up in my mouth.

But could trouble be in paradise for the co-stars? According to Perez Hilton, Emma raised eyebrows when she posted a tweet, seemingly of jibberish. It turns out Emma wasn’t drunk when she tweeted but instead threw out a little anagram which actually reads: Andrew and Shailene sitting in a tree.

Shailene Woodley is currently filming The Amazing Spider-Man 2 with the couple in NYC as Mary Jane – Peter Parker’s love interest. So what’s the deal? Is Shailene scamming on Emma’s man? Is she that dumb?

I can’t speak to Shailene’s IQ but I doubt Emma would play the situation like that. To the casual observer, Emma and Andrew seem pretty rock solid. Perhaps she’s just trying to drum up interest for the movie? I so don’t want to hate Shailene right now. I’ve remained pretty apathetic towards the up-and-comer but the fact that she scored the lead in the new movie, Divergent, forced me to sit up and take note. I love that book and was pretty surprised when they cast her. So now I’m making myself give her a chance because I really want to like the movie. A scandalous Andrew Garfield/Shailene Woodley romance would definitely not work for me. Nobody wants to see America’s Sweetheart, Emma Stone, humiliated – especially execs hoping for another YA blockbuster.

Do you believe the Emma Stone/Andrew Garfield breaking up stories? Would Emma really tweet her troubles? She isn’t Lindsay Lohan for crying out loud. The girl has some self respect!