Ian Somerhalder and Nina Dobrev Careful on The Vampire Diaries Set: Afraid To Be Fired and Replaced 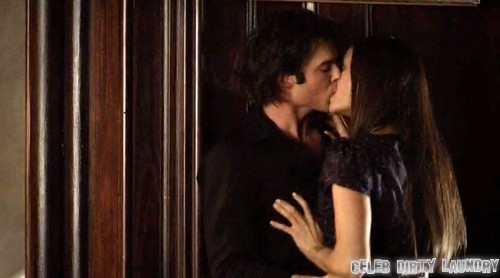 Nina Dobrev and Ian Somerhalder are back on set in Atlanta to shoot the fourth season of the Vampire Diaries, and they’re being very careful to not cause any undue gossip. Even though it’s been several months since they broke up, this is the first time that they’ve been ‘reunited’ in the public eye, which means that everyone’s watching them – including ‘sources’ that will have no problem leaking to whichever tabloid offers them the most money.

However, these sources do say that there hasn’t been anything untoward that’s occurred on set. They say Ian and Nina have remained professional throughout their first few days on set, and although they are trying to stay out of each other’s way, they’re not being obnoxious about it. So much for them falling back into each other’s arms, huh?

Well, they obviously broke up for a reason, and clearly time apart hasn’t fixed whatever issues they were having. Regardless, it should be interesting to see how they will cope when it comes time to do love scenes together. Unless the writers have drastically changed the story from where Season 3 left off, Ian and Nina’s characters are together now. That means making out, and making out in public is probably awkward enough without adding in the fact that both the participants have recently broken up.

So with all that in mind, what is the network going to do if it gets too awkward? Rumors are abounding that there is a possibility that Nina and Ian could be replaced after their contract ends after the sixth season. Most CW shows sign a standard contract of 6 seasons when they begin, and the Vampire Diaries is probably going to continue past then. But with their history and their film opportunities, will Nina and Ian want to stay? There’s already a Vampire Diaries spin-off called ‘The Originals’ and the show’s also been adding plenty of new cast members for the next season.

Could this all be prep for when they lose two of their leads after two more seasons? Let us know what you think in the comments.