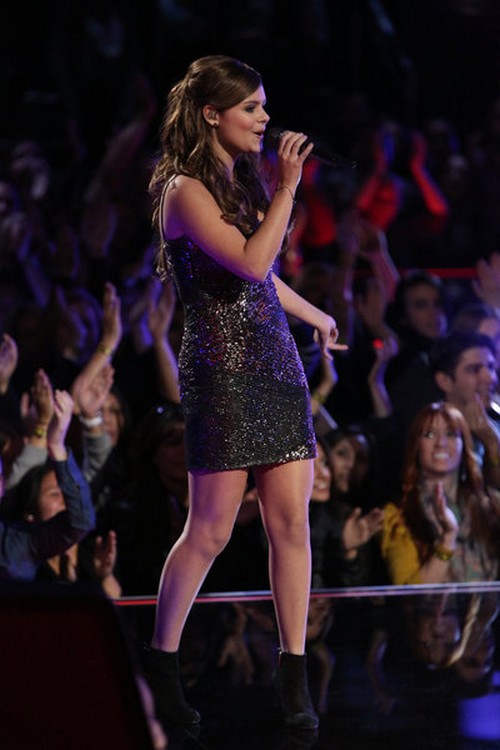 Jacquie Lee took the stage tonight on THE VOICE for her Top 3 Final performance and her new song choice.  Team Christina’s Jacquie Lee sang “And I Am Telling You” by Jennifer Hudson from the Dreamgirls.  Tonight’s show the remaining artists from each coach, Christina Aguilera, Adam Levine, CeeLo Green and Blake Shelton team performed live for America’s vote and the chance to win the title of ‘The Voice.’

Next up is Jacquie Lee with her final song; before the voice she was just a student and is amazed with how much her life has changed. Christina says she has a presence around her that is amazing; she is so happy to have Christina as her coach since she looks up to her so much. Christina gave her the song “And I Am Telling You” by Jennifer Hudson.”   Don’t forget if you want Jacquie to win the voice you have to vote for her.

On last week’s show Jacquie sang “Angel” and the judges loved her performance.  The judges said this about her performance, “Christina gives Jacquie Lee a standing ovation, Christina is amazed, Jacquie did things that she didn’t even know she could do.  She blew Christina away.  She thinks that Jacquie showed a lot of dynamic, and tonight was by far her best vocal performance, and she really stepped up to the plate.  CeeLo thinks Jacquie was “amazing,” and even though he has no one left to support she made him feel like he still belongs here tonight.” If you want Jacquie to make it to the semi-finals don’t forget you have to vote for her.”

On tonight’s show Phil Collen, Rick Allen, and Vivian Campbell perform “Pour Some Sugar On Me” with the four Voice coaches: Adam Levine, Blake Shelton, Christina Aguilera and CeeLo Green! On tomorrows finale Lady Gaga, Celine Dion, NE-YO and OneRepublic are set to perform in the live two-hour fall-finale.  Lady Gaga will perform her current single “Do What U Want,” from her latest release, “ARTPOP.