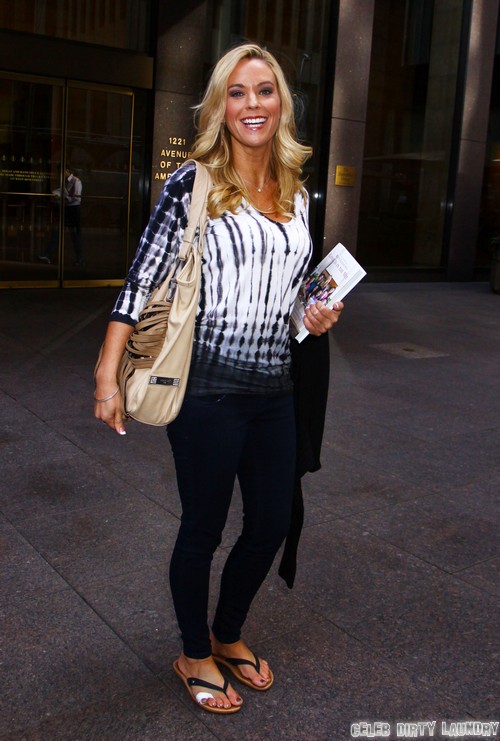 Kate Gosselin cannot resist showing off, and she’s proved that yet again with her latest tweet. She tweeted about her front row seats at a Sting concert, saying, “Had a great X on @TODAYshow Thx @OfficialSting for front row seat at your am on set performance (even tho I didn’t keep the rollers in:)”

Kate was a guest of the Today Show to pimp out her new cookbook and discuss her lawsuit against ex-husband Jon Gosselin, but she clearly wanted everyone to know about her oh-so-special treatment. Even though she’s still riding the coattails of her reality show [which has been cancelled for years], Kate managing to book the TODAY show is quite an achievement. So obviously she’s never going to let anyone forget, and I wouldn’t be surprised if we receive a consistent barrage of tweets about her interview and what type of sweets she got to eat  backstage.

It’ll also be interesting to see if Kate’s desperation and famewhoring will help the sales of her cookbook at all. Today does have sizable demographic, but does anyone really care about Kate Gosselin anymore? At one point, she used to have hundreds of thousands of Twitter followers, and now she has less than 70,000. Of course, if all 70,000 bought her book, it would end up becoming a bestseller. But because the majority of those 70,000 are just jobless trolls or reality show fans, I doubt they’ll actually put forth their hard earned money on a cookbook written by a washed up reality star. Go buy that gun Kate.

Kate Gosselin keeps the attention focused on her new book while stepping out in New York City, New York on September 25, 2013. Accompanied by her bodyguard Kate tries to hide her bandaged feet and when asked about her ex-husband Jon’s recent gun incident she replied, “Let’s just talk about my book.”