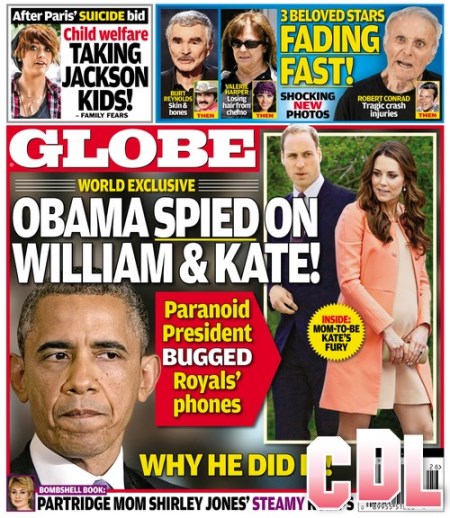 The Royal family has had many issues with spies and security leaks over the years. When Princess Diana was alive she spoke of being bugged and then after her death conspiracy theorists insist that the late Princess’ every move was being monitored up until her death. Security is supposed to be top notch and privacy for the Royal family is demanded yet every now and then someone slides through. According to the July 1st print edition of GLOBE magazine the NSA scandal that has imploded in the U.S. Now seems to have some repercussions for Prince William and Kate Middleton.

Edward Snowden is the snitch that got his hands on tons of top secret documents and he has taken that damaging information and spoon fed the media with details of how our National Security has functioned since 9-11. Supposedly all telephone and internet activity by John Q. Public can be gone over with a fine tooth comb if our government perceives there to be a potential threat in any of our actions. Violating civil rights seems to have become standard practice here in the states and according to GLOBE even royal phone calls have been bugged!

President Obama has watched his approval rating drop in the last week thanks to this scandal and I’m pretty positive that Kate and William are furious to know that there privacy has also been compromised. They take such desperate measures to ensure privacy, especially since Kate’s nude photo scandal last year, it’s likely twice as bad to learn that an ally has breached their trust. Will this hurt the U.S.’s relationship with Britain? I guess time will tell on that one.

Also covered in the July 1st print edition of GLOBE is the ongoing mess with the Jackson Family. Michael Jackson’s kids are a collective train wreck and child welfare has finally stepped in to seriously evaluate where Paris Jackson and her brothers should be living. After a stressful few months Paris slit her wrists a few weeks ago and it was a scream for someone to help get these kids onto a better path.

As always the GLOBE is bringing us pertinent information on heavy Hollywood hitters that are struggling with different issues. Valerie Harper, Robert Conrad and Burt Reynolds are all dealing with individual health issues that have left them depleted in one way or another. But leave it to GLOBE to bust open the Royal bugging scandal! Once again GLOBE bravely exposes the scandals that the big shots hoped to keep secret! Grab the new July 1st issue of GLOBE to find out more about all of these intriguing stories and a whole bunch more!