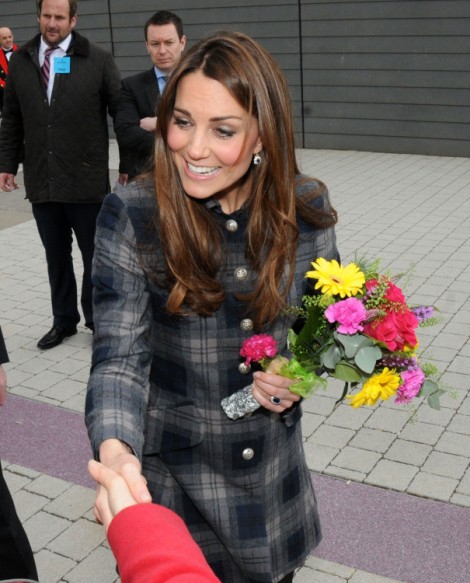 After that wicked bout of morning sickness early on in her pregnancy it seems that Kate Middleton has rebounded nicely. She and Prince William are currently enjoying a tour of Scotland and just yesterday they stopped in at Drumchapel Table Tennis Club to enjoy a match. Judging from the video, Kate is a pretty aggressive player and that’s just fine with her husband.  With what must feel like the future weight of the country on his shoulders, I’m betting that William likes Kate to take control of a lot of things in order to give him a break

It’s nice to see these two traveling together and escaping all of the drama swirling in the palace at home. First there is the Queens failing health which I’m sure is weighing heavily on both of them. Elizabeth is rumored to have met with Kate and told her that doctors have no real idea of what is wrong with her. It seems that at age 86 her body is simply beginning to fail.

There is also the internal power struggle that seems to be taking a toll on everyone. Queen Elizabeth has supposedly made it clear that she wants William to ascend to the throne next and to rule the island rather than Prince Charles. She simply believes that William and Kate are more in touch with the needs of the people and will lead them well. This has caused Charles’ wife, Camilla Parker-Bowles to lose whatever little bit was left of her mind. The raging alcoholic absolutely hates Kate and can’t imagine seeing her on the throne instead of her. The fighting has been epic and I’m sure William and Kate have been thrilled to tour another country rather than endure the drama.

They are continuing their trip through Scotland today with a visit to the restored Dumfries House, one of Prince Charles’s favorite projects.

Do you think Kate wears the pants in her marriage? Tell us your thoughts in the comments below!